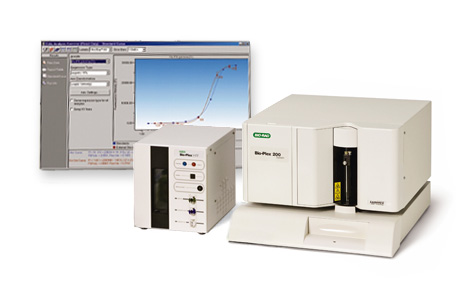 The Bio-Plex is the Bio-Rad version of the Luminex 200 platform.

The Bio-Plex suspension array system utilizes xMAP technology, licensed from Luminex Corp., to permit the multiplexing of up to 100 different assays within a single sample. This technique involves multiple distinctly colored magnetic bead sets created by the use of two fluorescent dyes at distinct ratios. Beads are conjugated with a reagent specific to a particular bioassay. The reagents may include antigens, antibodies, oligonucleotides, enzyme substrates or receptors. The technology makes use of multiple assays whereby one antibody to a specific analyte is attached to a set of beads with the same color and the second antibody is used to quantify the bound antigen. The use of different colored beads enables the simultaneous detection of many other analytes in the same sample. Imaging or laser excitation is then used to determine the different assays by bead colors, and determine analyte concentration by measuring the reporter dye fluorescence

For laser excitation detection the contents of each microplate well are drawn into the array reader and precision fluidics align the beads in single file through a flow cell, where two lasers excite the beads individually. The red classification laser excites the dyes in each bead, identifying its spectral address. The green reporter laser excites the reporter molecule associated with the bead, which allows quan-titation of the captured analyte. High-speed digital signal processors and software record the fluorescent signals simultaneously for each bead, translating the signals into data for each bead-based assay