While declines in U.S. hospital admissions during the onset of COVID-19 has been well-documented, little is known about how admissions during the rebound varied by age, insurance coverage and socioeconomic groups. The decline in non-COVID-19 admissions was similar across all demographic subgroups but the partial rebound that followed shows that non-COVID-19 admissions for residents from Hispanic neighborhoods was significantly lower than for other groups. The findings are reported in a new study in Health Affairs (released as a Fast Track Ahead of Print article) conducted by a research team from Sound Physicians, Dartmouth College, and the Dartmouth Institute for Health Policy and Clinical Practice at the Geisel School of Medicine at Dartmouth. 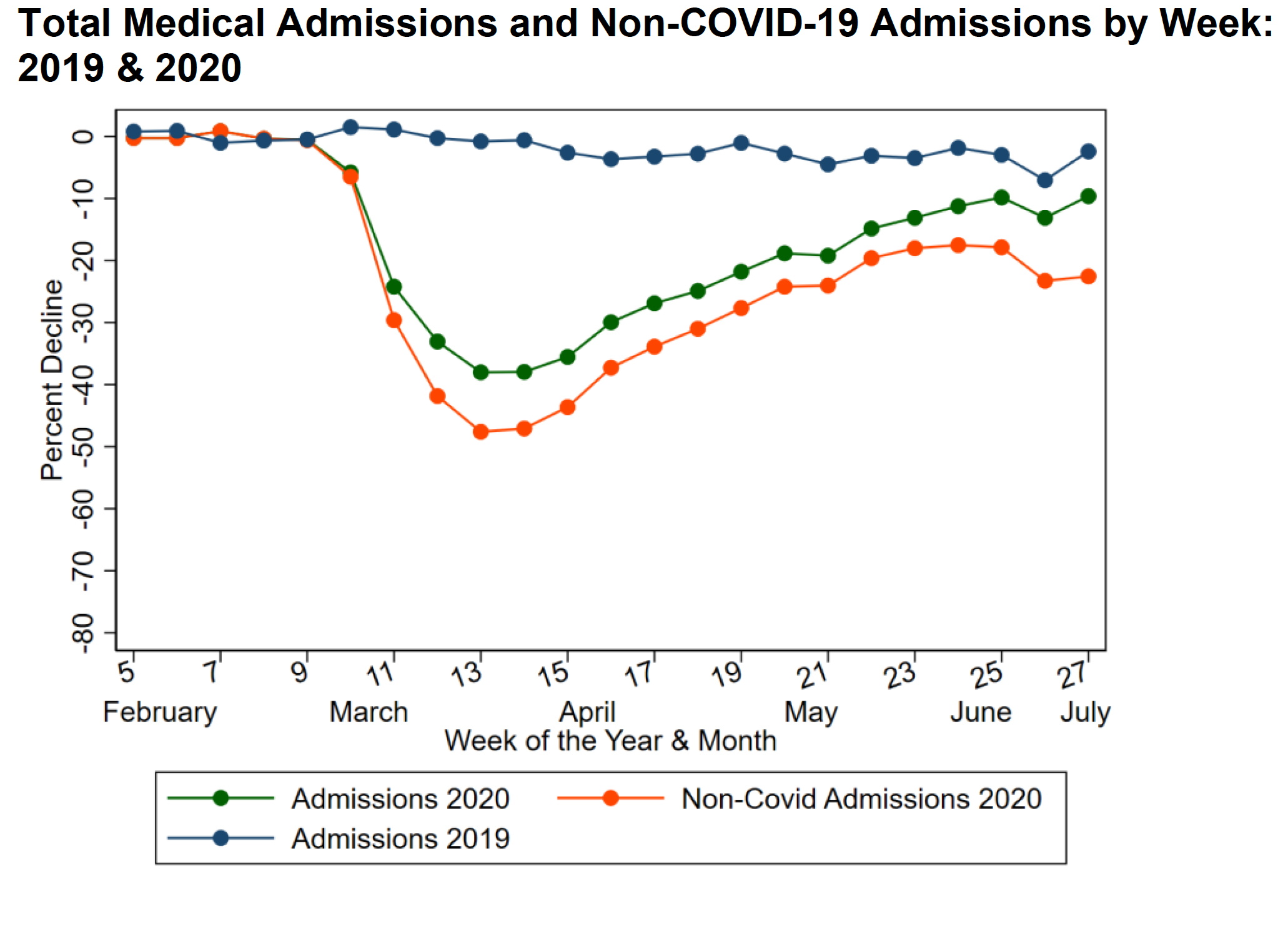 “Our study shows that patients from Hispanic neighborhoods did not have the same rebound in non-COVID-19 admissions as other groups, which points to a much broader issue of healthcare access and equity for lower-income and minority patients,” said senior author and health economist Jonathan Skinner, a professor at the Dartmouth Institute for Health Policy and Clinical Practice at the Geisel School of Medicine, and the James O. Freedman Presidential Professor in Economics at Dartmouth. As a result, these barriers may have contributed to higher in-hospital mortality rates in April for this group than for others,” he added.

The study drew on data from 1 million hospital admissions (from hospital administrative data and electronic medical and billing records) from Sound Physicians, a large nationally distributed medical group with hospitals throughout the U.S. The data came from 201 hospitals in 36 states, including areas hit hard early on by the pandemic, including Wash., Mich., Ohio, and the greater metropolitan area of New York.

The study’s results reports the following:

These particular diseases are reported in the results, as these were the acute conditions for which the declines were the highest. Most of the majority-Hispanic neighborhoods in this dataset were located in the Southwest and South— Calif., Ariz., Texas, and Fla.

The research team speculate that the declines in medical admissions may have been due in part to a fear of contracting COVID-19 by both physicians and patients, greater use of telemedicine, and possibly lower transmission rates of non-COVID-19 diseases following stay-at-home orders.

Available for comment are: Jonathan Skinner (jon.skinner@dartmouth.edu), senior author, and John Birkmeyer (jbirkmeyer@soundphysicians.com), lead author and chief clinical officer of Sound Physicians, and an adjunct professor at Dartmouth Institute for Health Policy and Clinical Practice at the Geisel School of Medicine at Dartmouth.

The study was co-authored by Amber Barnato and Nancy Birkmeyer at the Dartmouth Institute for Health Policy and Clinical Practice at the Geisel School of Medicine at Dartmouth, and Robert Bessler from Sound Physicians. The study was funded by the National Institute on Aging.