In the mid-1960s, Matthew Friedman had to make a crucial decision. As a Ph.D. student in pharmacology at Albert Einstein College of Medicine, he was studying the neurobiology of physical dependence and tolerance of drugs—doing novel mice experiments to show dependence and withdrawal syndrome with the drug scopolamine. One of his advisors was Jerome Jaffe, a psychiatrist who later became the drug czar under President Nixon. Friedman could stay on with Jaffe studying addictive drugs, or find a new avenue. It was a tough decision. If he had stayed with Jaffe, Friedman says, “I might have found myself in the Nixon White House supporting Jaffe when he was dealing with the drug problems, particularly with the Vietnam veterans.” 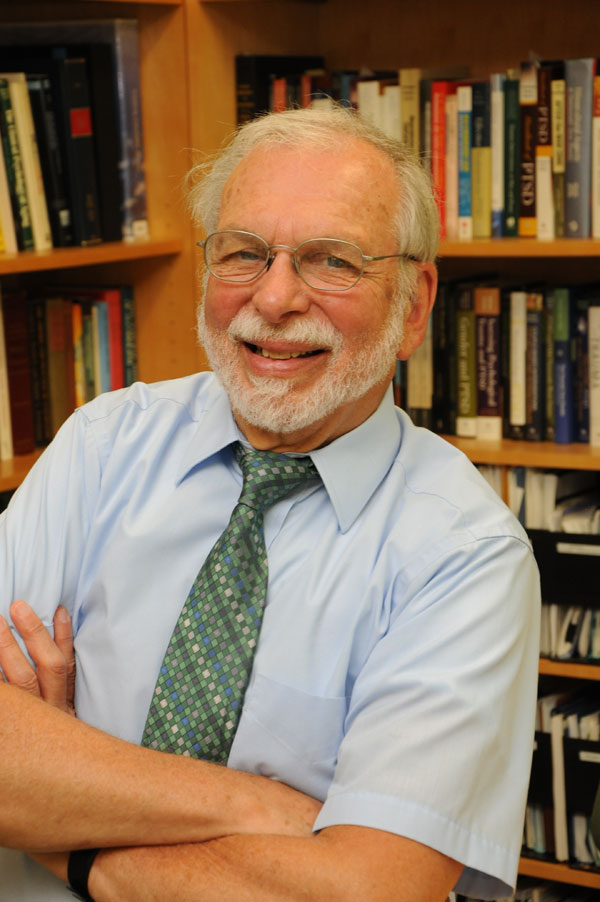 Matthew Friedman has led the National Center for PTSD since it was founded in 1989.
Photo by Jon Fox.

Yet Friedman could not see himself doing drug abuse research. He was fascinated by one of the first biological theories of depression, proposed by Joseph Schildkraut in 1965, and decided instead to study the neurobiology of depression. So in 1973, after completing his M.D. at the University of Kentucky, and residency training in psychiatry at the Massachusetts General Hospital and later at Mary Hitchcock Hospital, Friedman landed a job as staff psychiatrist at the V.A. Medical Center in White River Junction, Vt. He soon was studying super sensitivity of receptors in depressed patients. His move to Vermont (Friedman is a Dartmouth College ’61) to work with veterans also took him in an entirely new direction professionally—into post-traumatic stress disorder (PTSD). His road to PTSD, he says, was completely by accident, “an homage to serendipity.”

Now, after helping countless patients and becoming a world leader in clinical research and treatment of PTSD, Friedman is retiring as executive director of the National Center for PTSD, a post he has held for almost 25 years—since the Center opened its doors to veterans in 1989.

Friedman started working with veterans long before. When he joined the White River VA in 1973, Vietnam veterans were coming into the medical center, “suffering tremendously. And we didn’t really understand what it was.” By 1978, Friedman was chief of psychiatry services there, and in 1979 he helped found one of the nation’s first community-based, multi-site mental health treatment programs for veterans, named Veterans-Integrated Community Care (VICC). When the grant money funding VICC ran out, there was such a public outcry that the Vermont Congressional delegation helped continue the program.

In 1984, Friedman chaired a special committee on PTSD, authorized by the full U.S. Congress, to determine what improvements were needed in veterans’ mental health care. “In many ways the committee was my analogy of the Irish monks preserving Aristotle in the Early Middle Ages,” says Friedman. “We kept the flame flickering until the National Center came to be.” Under his direction, the committee did an unprecedented survey of 450,000 veterans’ outpatient mental health visits. The committee’s recommendations led, eventually, to most of the VA’s 172 hospitals adopting a specialized approach called PCTs (PTSD Clinical Teams). Key members of Friedman’s committee later joined him in creating the National Center for PTSD, a congressionally mandated multi-center consortium within the VA health-care system established in 1989 with Friedman as executive director.

With Paula Schnurr, now acting executive director of the National Center for PTSD and a long-time research collaborator, Friedman completed three major VA multi-center clinical trials on PTSD. The first was a seminal study that changed the whole landscape in PTSD research, says Schnurr. “It showed you could bring rigor to large-scale psychotherapy research.” It focused on group therapy and involved 360 Vietnam veterans. The second trial compared two PTSD treatments for 284 women veterans and service women, the first multi-center VA trial to do so.

The success of the Center, says Schnurr, is due in huge part to how Friedman gains people’s “respect and trust. That’s one of his greatest strengths, that people accept him as a leader and it’s not just because they respect him,” she says, “they really trust him and they like him.” “He has unbelievable confidence in people and it’s effective,” adds Jessica Hamblen, deputy executive director of the Center and associate professor of psychiatry at Geisel.

Friedman is considered a pioneer in the field of traumatic studies. He is known for his long-time devotion to research on the causes and treatments of PTSD, and to advocating on the part of veterans and civilians who have suffered from war, domestic violence, terrorism and natural disasters. After working with federal and New York state officials following 9/11, Friedman and colleagues developed a Psychological First Aid manual which they made available to national and state authorities following Hurricane Katrina in 2005. The manual has since been used for helping survivors of many disasters and other mass casualty situations over the long term. “His leadership has changed health care for veterans and in fact, for all across the globe,” says Robert Ursano, director of the Center for the Study of Traumatic Stress at the Uniformed Services University School of Medicine. He has also led or contributed to all of the major U.S. practice guidelines for treating PTSD including those of the American Psychiatric Association and the joint VA/Department of Defense guideline.

Yet with all his clinical research, health policy work, and new initiatives at the Center, Friedman has always taken time to see patients. He has been a practicing clinician for over 40 years, both at the White River VA and at DHMC. “No matter how busy he was, he made the time to see patients,” says Schnurr. “Being the clinician that he is, that has helped his research, his leadership, anything he’s touched I think he’s gone back to that information from his patients.”

Friedman is very candid about the sacred trust he keeps with his patients struggling with PTSD. With a new patient, he explains, he will often say, “Look, I understand how hard this is for you and I respect you for coming forward. And if it gets too hard, let me know and I’ll back off. And I always keep my word.” Friedman says it’s important to have “a realistic calibration” of what can be expected through treatment. “To understand that we have treatments for PTSD and we actually have our cures,” he says. “Some of our treatments are fantastic and very effective, but there’s certainly room for improvement.”

Friedman will continue at the Center as a senior advisor. He also supervises residents who provide direct patient care to 10-12 patients per week. He continues his research as well, in clinical neuroscience, and recently was certified in mental health by the Red Cross. “One of the most important evolutions of my own thinking is to be a public health psychiatrist,” he says. “So I’m still learning, still preparing, and that’s what people should always be doing.”