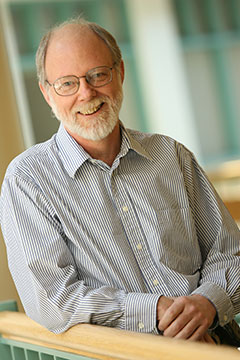 The study, published today in the New England Journal of Medicine, notes the urgent need for "alternative strategies for the prevention of HIV transmission from mother to child, as well as for the treatment of HIV infection..."

Since 2000, the standard approach for preventing HIV transmission from infected pregnant women to their children in African nations has been a single dose of the antitretroviral drug Nevirapine, administered to the mother while in labor and to the child at birth. Palumbo says that treatment regimen prevented HIV infection in about half of the cases, presenting an inexpensive and simple prevention approach.

"The Achilles heel in this regimen, though, is that the HIV virus in the mothers and in those infants who became infected frequently developed resistance to Nevirapine," says Palumbo. "Although that resistance fades over time, the Nevirapine-only prevention regimen resulted in uncertainty over later treatment efforts, especially since first-line treatment was also dependent on Nevirapine."

As the result of a National Institutes of Health conference to find trials to improve the effectiveness of treatment for pediatric HIV, Palumbo and his colleagues designed and conducted a trial at 10 sites in six African nations, involving 164 HIV-infected children six to 24 months of age who qualified for treatment according to World Health Organization (WHO) criteria. The initial therapy consisted of the antiretroviral drugs Zidovudine and Lamivudine, plus either Nevirapine or Ritonavir-boosted Lopinavir, also known as Kaletra. The result: the use of antiretrovirals with Kaletra was proven to be so superior that the WHO revised its guidelines for treatment of pediatric HIV.

"We set out to see if enhancing a common three-drug treatment for HIV with either Nevirapine or Kaletra represented a reasonable standard of care," says Palumbo. "We demonstrated the clear superiority of Kaletra, and when the study results became available the WHO revisited and revised its guidelines."

In an editorial accompanying the article, the Journal praises the results of the study, along with another study of HIV-infected mothers conducted simultaneously by another research group. "These studies help equip us with strategies to deal with the current imperfections in our scale-up efforts," wrote editorial authors Marc Lallemant, M.D. and Gonzague Jourdain, M.D. "With new WHO guidelines calling for increased access to therapy and prophylaxis ... the goal of eradicating pediatric HIV is within sight."

But that eradication isn't necessarily on the near horizon, cautions Palumbo. He cites the nearly 10 years it took for the Nevirapine regimen to become commonly accepted in African nations, and notes the economic and political barriers to rapid acceptance of the new WHO guidelines.

"The recommendations need to filter down from the WHO to the countries, which are then faced with the question of how to operationalize those recommendations. It's a laborious process ... it takes time."

A second cohort of 288 children is still being studied under Palumbo's P1060 study which is being conducted by the NIH-funded IMPAACT Network in which Palumbo holds a leadership role. In that section of the study, a head-to-head comparison of the effectiveness of Nevirapine versus Kaletra is being measured in infants who have never been previously exposed to Nevirapine. That portion of the study is expected to end in March, 2011.

Regardless of the results, Palumbo notes the extraordinary efforts of an international team of 19 researchers from 18 different institutions.

"This is a remarkable team. There was a lot of ground work to be done at 10 different sites across six countries. The volunteer families and their infants place enormous trust in the clinical research teams. It is an incredible collaboration."