US immunologists to honor DMS' Green 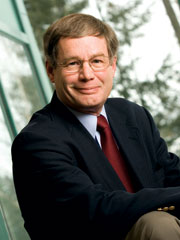 Hanover, NH—The American Association of Immunologists (AAI) will honor Dartmouth Medical School's chair of microbiology and immunology for his work on public policy issues and his advocacy of research funding on behalf of fellow immunologists and other scientists.

William R. Green, PhD, a former dean of DMS and the current director of Dartmouth's Center of Biomedical Research Excellence (COBRE) in immunology will receive the Distinguished Service Award during AAI's 99th annual meeting in Boston in May of 2012. From 2005 to 2009 he served on AAI's Committee on Public Affairs (CPA), the last two as chair, during which he led efforts to raise public awareness of the importance of biomedical research and to keep federal grants flowing to researchers in immunology and related fields.

"It was a real honor and education for me, on behalf of the scientific community, to serve on the AAI CPA - being involved in everything from meeting with patient advocacy groups to visiting the offices of senators and congressmen on Capitol Hill," Green says. "While as researchers our primary responsibility is to create new knowledge in our labs, it is also vitally important to devote our energy to informing the public and our elected leaders about what we do and how funding and regulatory issues affect our ability to successfully conduct research on improving medical treatments and the nation's health."

Green also directs the Dartmouth Community Medical School and holds the Elmer R. Pfefferkorn professorship at DMS, and is the current president of the Association of Medical School Microbiology and Immunology Chairs (ASMIC).

"We're delighted that Dr. Green is being recognized for his important contributions to immunology and medical research," says Wiley "Chip" Souba, MD, ScD, MBA, Dean of Dartmouth Medical School and Vice President for Health Affairs at Dartmouth College. "While Bill is passionate about his own science, he is equally passionate about the success of his faculty. That ability to shine in reflected light is a hallmark of effective leadership."

Green joined the DMS faculty in 1983, and directed the immunology program from 1992 to 2002. His first term as chair of Microbiology and Immunology ran from 2002 through 2007, after which he served as dean of DMS from January 2008 through September 2010. On October 1 of 2010, he resumed the full-time chairmanship of Microbiology and Immunology, upon the arrival of new dean Dr. Souba.