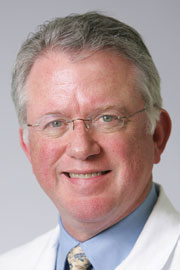 Walsh, a resident of Norwich, Vt., and a professor of surgery at Dartmouth Medical School (DMS), joined the staff at Dartmouth-Hitchcock Medical Center (DHMC) in 1987. He is medical director of referring-physician services at DHMC, and runs a biweekly clinic at the Central Vermont Medical Center (CVMC) in Barre.

"Obviously this is a great honor," Walsh says of the vice presidency, which he will serve for one year, "but really, it is recognition of the involvement that DHMC and its physicians have in the provision of health care to the citizens of Vermont."

The 2,000-member Vermont Medical Society serves Vermont's doctors and the patients and communities for which they care, through public-policy advocacy at the state and federal levels. It also provides legal, administrative, and educational support, produces news and information, and offers member benefits that increase medical practice effectiveness and efficiency. For more information, visit www.VTMD.org.