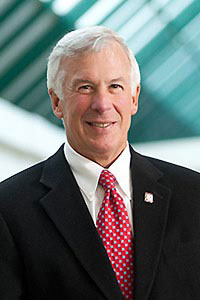 Lebanon, NH—Dr. James N. Weinstein, President of the Dartmouth-Hitchcock (D-H) Clinic and Director of The Dartmouth Institute for Health Policy and Clinical Practice, has been elected to the Institute of Medicine (IOM) of the National Academies of Sciences. Membership in the IOM is considered the highest honor in the fields of health and medicine.

"This an enormous honor," said Dr. Weinstein. "I am pleased and humbled to join an organization that has had an unparalleled impact on the field of medicine and medical practice."

According to the October 17, 2011 IOM announcement, members are elected "through a highly selective process that recognizes individuals who have made major contributions to the advancement of the medical sciences, health care and public health." Weinstein is one of 65 new members and five foreign associates elected because he has "demonstrated outstanding professional achievement and commitment to service."

"It is a great pleasure to welcome these distinguished and accomplished individuals to the Institute of Medicine," said IOM President Harvey V. Fineberg, who announced the new members at the organization's national meeting in Washington, D.C. "Each of them stands out as a professional whose research, knowledge and skills have significantly advanced health and medicine, and their achievements are an inspiration."

The Institute of Medicine is unique in its structure as both an honorific membership organization and an advisory organization. Established in 1970 as the health branch of the National Academy of Sciences, IOM has become recognized as a national resource for independent, scientifically informed analysis and recommendations on health issues.

Founding Chairman of the Department of Orthopaedics, Dr. Weinstein since 2010 has been President of the Dartmouth-Hitchcock Clinic, the 900-physician group practice for the D-H system, and Co-President of Dartmouth-Hitchcock. He holds the Peggy Y. Thomson Chair in the Clinical Evaluative Sciences at Dartmouth Medical School (DMS).

Dr. Weinstein succeeded Dr. Jack Wennberg as Director of The Dartmouth Institute for Health Policy and Clinical Practice (TDI) in 2006. He is a founding member of the High Value Healthcare Collaborative, a partnership among TDI, D-H, Cleveland Clinic, Denver Health, Mayo Clinic, and Intermountain Healthcare, which is seeking to improve health care while lowering costs. As Clinic President, he is leading initiatives to implement value-based care throughout the Dartmouth-Hitchcock organization.

He currently serves on the Institute of Medicine's Standing Committee of Medical Experts to Assist Social Security on Disability Issues and the IOM's Roundtable on Value and Science-Driven Health Care.

Dr. Weinstein is a leader in advancing "informed choice" to ensure patients receive evidence-based, safe, effective, efficient and appropriate care. In 1999, he established the first-in-the-nation Center for Shared Decision-Making at Dartmouth-Hitchcock, where patient preferences and values are an integral part of diagnostic and treatment decisions.

An internationally renowned spine surgeon and health services researcher, Dr. Weinstein also founded the multidisciplinary Spine Center at DHMC. It has become an international model for patient-centered health care delivery, using patient self-reported outcomes to measure and inform clinical practice. He is editor-in-chief of the journal Spine and is the principal investigator of the nation's largest National Institute of Health-supported study on back-related conditions, the Spine Patient Outcomes Research Trial (SPORT), now in its 13th year of funding.