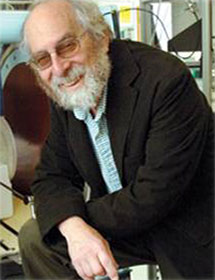 Over the next five years, if all options are exercised, the Biomedical Advanced Research and Development Authority (BARDA) will provide the collaborative with $29.8 million to improve the speed, accuracy, in-the-field portability, and user-friendliness of the "dosimeter" that DMS radiologist Harold Swartz, MD, PhD, MSPH, invented to detect levels of radiation in teeth. In mid-August, the medical school signed the contract with BARDA.

"This will be a very specific, very focused development leading to a Food and Drug Administration (FDA)-approved device to be manufactured in large numbers," says Swartz, a DMS professor of radiology, radiation oncology, physiology, and community and family medicine. "Making this easy to use is an audacious undertaking, but it seems completely feasible."

In 2010, the National Institutes of Health (NIH) found Swartz's research in electronic paramagnetic resonance (EPR) feasible enough to award $16.6 million over five years to Dartmouth's EPR Center, to form the Biodosimetry Center for Medical Countermeasures Against Radiation (Dart-Dose CMCR). Dart-Dose CMCR is one of seven centers nationwide focusing, through the National Institute of Allergy and Infectious Diseases (NIAID) on one or more aspects of medical response to large-scale incidents.

Under the BARDA agreement, Swartz expects his Dartmouth team - now at 30 members and growing - to spend the first base period of 18 months on research and development, with GE experts helping to amass data in support of an eventual submission for clearance of a diagnostic device to the Food and Drug Administration (FDA). If the first option is exercised, the DMS team would spend the next 18-month period improving the components of the device - particularly the "resonator" that goes on the tooth of a patient - while GE starts manufacturing prototypes.

"Hal's research offers a convenient way to test radiation levels in the general population in the event of damage to a nuclear reactor," says Wiley (Chip) Souba, MD, ScD, MBA, dean of Dartmouth Medical School and vice president for health affairs at Dartmouth College. "The device is portable, reliable, and non-invasive. Its ease of use makes it most practical."

In collaboration with Dana Farber, Swartz's team will test each iteration of the dosimeter prototype in development for the BARDA contract on healthy volunteers as well as on people undergoing treatments involving radiation - including candidates for bone-marrow transplants - under the guidelines of the FDA.

Coordinating the efforts of the team are the two co-directors for both the CMCR grant and the BARDA contract. While Benjamin B. Williams, PhD, a research assistant professor of radiology at DMS, focuses on the dosimeter for teeth, Ann Barry Flood, PhD, a professor of community and family medicine and of radiology at DMS and a professor at The Dartmouth Institute of Health Policy and Clinical Practice (TDI), oversees testing in human subjects and their models, and directs pilot programs for the Dart-Dose CMCR.

Swartz pioneered research in this field during his tenure with the Army medical corps in the 1960s. In a 1968 paper, he showed that EPR could measure radiation exposure through the teeth of patients and, potentially, in their fingernails. He continued his research at the Medical College of Wisconsin and at the University of Illinois at Urbana-Champaign before coming to Dartmouth in 1992.

The CMCRs are part of NIAID's larger program of medical countermeasures. In addition to continuing its research, the CMCR at Dartmouth annually supports up to 10 pilot studies, at $50,000 each, for research that complements the Dart-Dose theme of physical biodosimetry and other studies relevant to the overall mission of the CMCRs.

"I'd be very disappointed and surprised if we didn't come through," Swartz says of the BARDA-funded project. "Success is not going to take luck. It's going to take a lot of work and a lot of dedication, and our group is eager to move ahead."