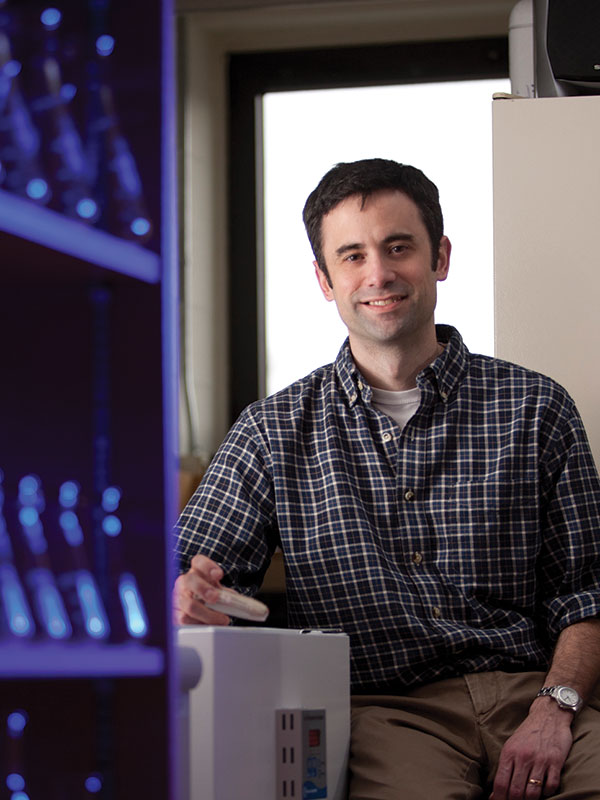 Hanover, NH—The Pew Charitable Trusts has named Dartmouth biochemist James B. Moseley, PhD, one of its 22 Pew Scholars in the Biomedical Sciences for 2011, recognizing him as one of the United States' most promising scientists.

Moseley and the Pew class of 2011 joins a select community that includes MacArthur Fellows, recipients of the Albert Lasker Medical Research Award, and three Nobel Prize winners. These scholars conduct cutting-edge research into human diseases ranging from Alzheimer's to diabetes to ocular degeneration. The program encourages early-career scientists to advance research that leads to important medical breakthroughs and treatments.

"I'm very honored to be recognized by the Pew Charitable Trusts and their advisory committee," says Moseley, an assistant professor of biochemistry at Dartmouth Medical School (DMS). "They encourage us to take risks that can lead to groundbreaking science, and the award provides both the confidence and the resources to do that."

With a $240,000 award from Pew, Moseley plans to spend the next four years exploring how cells use information about their size and shape to determine when to reproduce. For an organism—and its constituent tissues—to grow, its resident cells must increase in volume and in number. And many cells base the decision to divide in part on size. When the cell grows large enough, it will split in two.

As a postdoctoral fellow in molecular and cell biology at the Rockefeller University between 2006 and 2010, Moseley discovered that a rod-shaped yeast in cells uses a protein called Pom1 as a sort of "molecular ruler" to keep track of its length. His team will use genetics and imaging techniques to assess how cells behave when Pom1 is missing, and whether forcing the yeast to assume unusual configurations—wider, thinner, longer, shorter or curved—will affect whether and when it divides.

"With the Pew award, my laboratory will study how this size is measured, and how cells cope with defects in their measuring systems," Moseley explains. "These are questions that have been around for a long time, but we now have the techniques and approaches to tackle them and make some real progress."

"It is encouraging for me to join the ranks of other Dartmouth researchers who have received this award in the past," Moseley concluded. "I hope to follow their footsteps by using this award to open new research directions."

To date, the Pew Charitable Trusts has invested more than $125 million to fund more than 500 scholars, under a rigorously competitive program that allows recipients to pursue their research without restriction. Applicants who work in all areas of physical and life sciences related to biomedical study must receive nominations from invited institutions and demonstrate both excellence and innovation in their research. This year, 175 institutions were requested to nominate a candidate and 136 eligible nominations were received.

"Pew is pleased to provide this country's most ambitious and dedicated scientists with timely funding that enables them to explore novel areas of investigation early in their careers, at what may be the most inventive and creative period in their research," said Rebecca W. Rimel, president and CEO of The Pew Charitable Trusts.