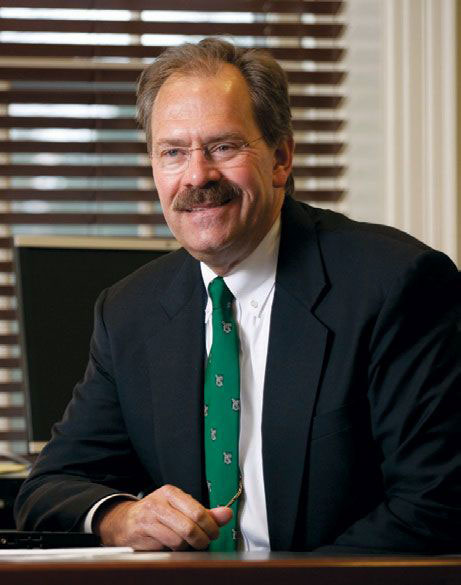 Hanover, NH—Eight months to the day into his tenure as dean of Dartmouth Medical School (DMS) and Dartmouth College's vice president for health affairs, Wiley "Chip" Souba, MD, unveiled plans to lift DMS into the top 20 among medical schools nationwide by the end of the decade.

"It's a big leap," Souba said in his first 'State of the Medical School' address at DMS' Kellogg Auditorium on June 1, pointing to the school's current No. 32 ranking in research by US News & World Report. "We need to start working now."

"We can't win as a bunch of separate confederacies," Souba said. "We've got the leadership in place to do it and must work as a team."

He described the affiliation of DMS faculty and researchers with the VA's National Center for Posttraumatic Stress Disorder (PTSD) as "a spectacular example of cooperation." And he emphasized the need for the medical school to attract more private and public research grants, such as the $16.6 million award from the National Institutes of Health (NIH) with which DMS' new Biodosimetry Center for Medical Countermeasures Against Radiation (Dart-Dose CMCR) is leading a national effort to develop and refine portable devices for measuring radiation exposure in the teeth, bones, hair, and nails of survivors of nuclear accidents and attacks. Under the direction of dosimetry pioneer and longtime DMS faculty member Harold M. Swartz, M.D., the center is preparing to enter an agreement with several institutions and agencies and General Electric that could push the funding level past $30 million.

Souba also cited recent renewals of grant support to two of Dartmouth's Centers of Biomedical Research Excellence (COBREs)—under the leadership of former DMS Dean William Green, PhD and Bruce Stanton, PhD—as examples of the kinds of research that can help DMS entice top clinicians and researchers to a faculty which, in the last several years, has seen 10 principal investigators move on to other opportunities.

Along with the research must come infrastructure to support it, and to attract new faculty and students, Souba said, pointing to projects such as the proposed construction of the Koop Complex in Lebanon and the Innovation Center in Hanover.

Souba praised DMS's associate dean for medical education, David W. Nierenberg, MD, for his groundwork toward transforming the curriculum via a dual degree in medicine and in clinical science. Souba also said that he wants to establish, in conjunction with Dartmouth's Tuck School of Business, a center that hones the leadership skills of students and faculty. He also promised to increase their opportunities to serve patients and fellow clinicians in the surrounding community and worldwide, and to establish a "pipeline program" encouraging Dartmouth undergraduates to apply to the medical school.

"We can take this on and be great," he concluded. "There's every reason to believe that the future is bright."

Souba succeeded Green as dean on October 1, 2010, after serving as dean of the College of Medicine and as vice president and executive dean of health services at The Ohio State University. He holds an MD degree from the University of Texas Medical School in Houston, a ScD in nutritional biochemistry from the Harvard School of Public Health, and an MBA from Boston University.

He began his career in medical education at the University of Florida, and subsequently taught, researched, and practiced at Harvard Medical School and Massachusetts General Hospital. In 1999, he was named Waldhausen Professor and chair of the department of surgery at the Penn State College of Medicine and surgeon-in-chief at Hershey Medical Center.

While introducing Souba's address, Alan I. Green MD, leader of the search committee that recommended Souba's appointment to Dartmouth College President Jim Yong Kim, noted that Souba "rose very quickly" from a field of 60 "serious candidates," of whom the committee interviewed 11 before narrowing the field to four.

"We were delighted that he was willing to say goodbye to Columbus," Green said.

So is Souba, near the end of his first academic year at Dartmouth: "Today is the beginning of month nine," he said. "The honeymoon is over."