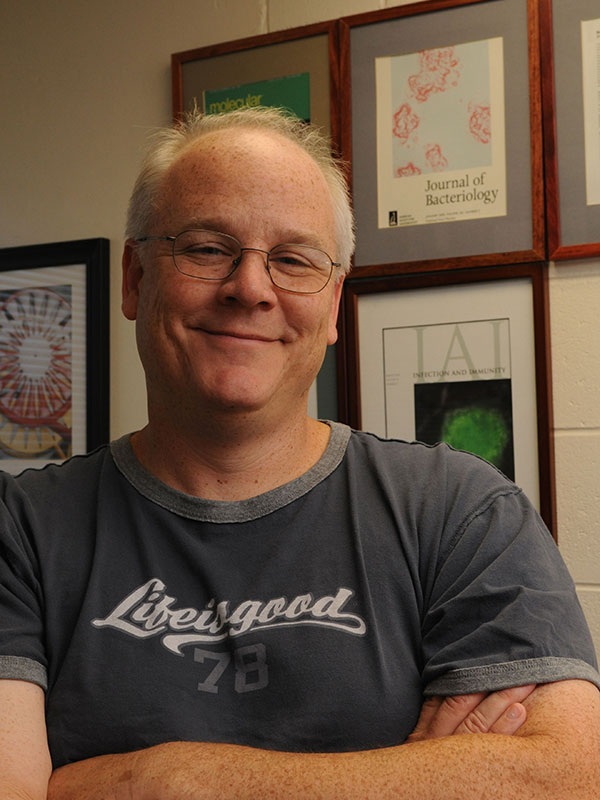 Hanover, NH—Dartmouth Medical School (DMS) researchers George A. O'Toole, PhD, and Ronald K. Taylor, PhD, have been elected as Fellows in the American Academy of Microbiology.

O'Toole and Taylor join the 2,500-plus-member Fellowship along with 76 microbiologists in all subspecialties, including basic and applied research, teaching, public health, industry, and government service. The Academy annually elects fellows through a peer-review process based on their record of scientific achievement and original contributions.

"It is an honor to be elected a fellow in the AAM, in particular because the nomination and the election come from your peers," says O'Toole, a professor of microbiology and immunology. "I'm really flattered to be part of an organization comprised of so many outstanding scientists. I credit my colleagues and the environment here at Dartmouth for allowing me to launch my research career."

In addition to leading a laboratory of 10 researchers that focuses on understanding how antibiotic-resistant bacteria form communities called "biofilms," O'Toole also collaborates with Dartmouth's Microbiology and Molecular Pathogenesis Program, which Taylor directs.

"You do not achieve your research accomplishments as an island," says Taylor, a professor of microbiology and immunology. "I have been fortunate to have incredible opportunities during my training and to have so many productive interactions with great colleagues, graduate students, and postdoctoral fellows."

Taylor's laboratory develops vaccines and drugs to prevent and treat epidemics of cholera, which spread through drinking water in unhygienic environments. His team currently is exploring ways to interfere with the function and production of a protein, TcpA, that forms on the surface of the marine bacterium Vibrio cholerae and promotes infection of humans.

"The opportunity to pursue scientific research is extremely exciting," Taylor says of his work. "Our research explores many aspects of the molecular mechanisms that lead to the ability of Vibrio cholerae to cause disease, and that have helped to shape paradigms of bacterial pathogenesis mechanisms in general."

Taylor also is the principal investigator for New Hampshire's new IDeA Network of Biomedical Research Excellence (INBRE), in which a consortium of eight schools co-led by DMS and the University of New Hampshire is using a $15.4-million grant from the National Institutes of Health (NIH) to support biomedical research by faculty and students throughout the Granite State.

O'Toole's current projects include an effort, with funding from the Cystic Fibrosis Foundation, to identify the bacterial pathogens that live in the lungs of CF patients, and to identify more effective treatments.

"We are interested in understanding the molecular mechanisms that control a bacterium's ability to live a solo lifestyle as a free-swimming 'planktonic' cell, versus living as part of a multicellular community," O'Toole says. "In the context of CF, biofilms form in the lungs of these patients and cause chronic infections. We are very interested in how such communities form, why they are so resistant to antimicrobials, and how we can treat such infections."

To learn more about the American Academy of Microbiology, visit http://academy.asm.org.