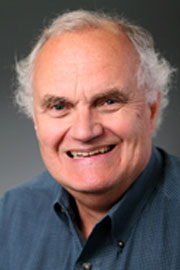 Lebanon, NH—Dartmouth Medical School (DMS) announced today that it is a winner of a $100,000 grant from Grand Challenges Explorations, an initiative funded by the Bill & Melinda Gates Foundation. Principal investigator Peter F. Wright, MD, a DMS professor of pediatrics and an international expert in infectious diseases, will pursue an innovative global health and development research project, titled "Mucosal Immunity in Polio."

"GCE winners are expanding the pipeline of ideas for serious global health and development challenges where creative thinking is most urgently needed," said Chris Wilson, director of Global Health Discovery at the Bill & Melinda Gates Foundation. "These grants are meant to spur on new discoveries that could ultimately save millions of lives."

To receive funding, Wright and other Grand Challenges Explorations Round 6 winners demonstrated in a two-page, online application a bold idea in one of five critical global health and development topics: polio eradication, HIV, sanitation and family health technologies, and mobile health. Applications for the current open round, Grand Challenges Explorations Round 7, will be accepted through May 19, 2011.

In collaboration with the Global Polio Eradication Program and the Netherlands National Institute for Public Health and the Environment, Wright's team at Dartmouth will spend the next year testing and analyzing before-and-after stool samples from children who received polio vaccines during recent clinical trials in Egypt and Oman. DMS researchers joining Wright are Wendy Wieland-Alter from the Department of Medicine, Natalia Ilyushina from the Department of Pediatrics, Molly Housman from the Department of Microbiology and Immunology, and DMS professor of pediatrics John F. Modlin, MD, a longtime collaborator with Wright on international-health projects in infectious disease.

"This project addresses a key problem standing in the way of global polio eradication," Modlin said. "That is, an incomplete understanding of how different polio vaccines, namely oral poliovirus vaccine (Sabin) and inactivated polio vaccine (Salk) contribute to control of the spread of polioviruses from person to person in resource-limited settings with poor sanitation and high population density.

Wright welcomed news of the grant as "an opportunity to enlarge the scope of our lab, which had been very much devoted to influenza projects. These kinds of things strengthen Dartmouth's visibility and interest in global-health initiatives."

About Grand Challenges Explorations
Grand Challenges Explorations is a $100-million initiative funded by the Bill & Melinda Gates Foundation. Launched in 2008, Grand Challenge Explorations grants have already been awarded to nearly 500 researchers from over 40 countries. The grant program is open to anyone from any discipline and from any organization. The initiative uses an agile, accelerated grant-making process with short two-page online applications and no preliminary data required. Initial grants of $100,000 are awarded two times a year. Successful projects have the opportunity to receive a follow-on grant of up to US$1 million.