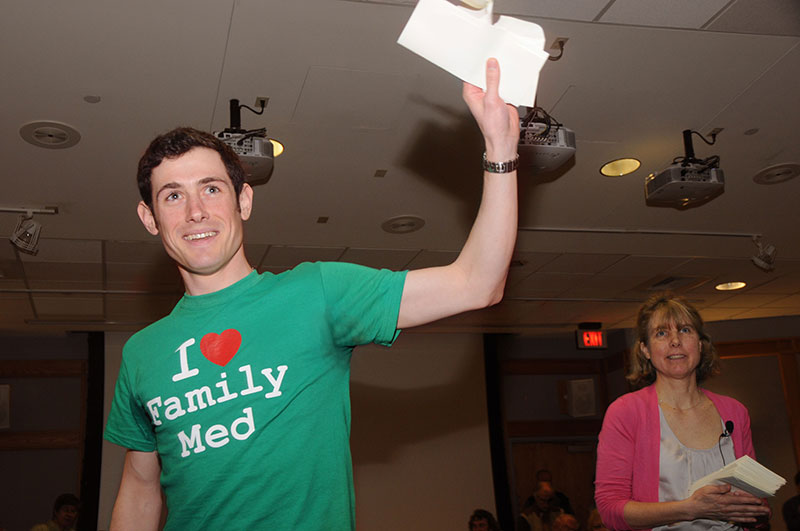 "This is a celebration of an enormous amount of work on the part of your kids," Souba told parents of the aspiring physicians before adding, "I matched to Dartmouth six months ago."

Among the seven students who will continue their training at Dartmouth-Hitchcock Medical Center (DHMC) in the fall, student government president and internal-medicine candidate Erin Sullivan will be making a second homecoming.

"I was born at Mary Hitchcock Hospital in 1980," Sullivan said after the ceremony. "My dad was doing his residency at Dartmouth when I was born.

"This was my first choice. I'm very happy to be staying. I looked at a few other places - Yale and Brown were my next two choices - but I still have a lot more to learn at Dartmouth. I have a lot of respect for the medical faculty."

In all, 37,735 medical students applied for 26,158 positions in the National Resident Matching Program (NRMP), according to the NRMP. And more than 16,000 medical-school seniors in the United States learned at Match Day ceremonies where they'll spend their next three to seven years.

The plurality of the Dartmouth students - 25 - will go into internal medicine, with two of them entering joint internal-medicine/primary-care programs. Seven from DMS are following the pediatrics path, five are pursuing anesthesiology, four are going into family practice, and four will pursue obstetrics/gynecology.

In addition to the seven staying at DHMC, eight students will train in Massachusetts, eight in California, six in New York state, four in Washington state and two in Canada.

Every February, students declare at which teaching hospitals they prefer to train, and the hospitals in turn rank the students who apply. A computer algorithm then sorts and matches the aspiring doctors with the training institutions, and the Monday before Match Day - traditionally the third Thursday in March - students find out whether they got one of the available slots.

Following Dartmouth's Match Day tradition, Souba and Harper called students in random - rather than alphabetical - order to collect their envelopes. Each student in turn deposited a dollar in a bowl, with the final student keeping the kitty as a reward for waiting the longest. The 2011 prize went to Katherine Au, who will train in obstetrics and gynecology at Oregon Health & Science University in Portland.