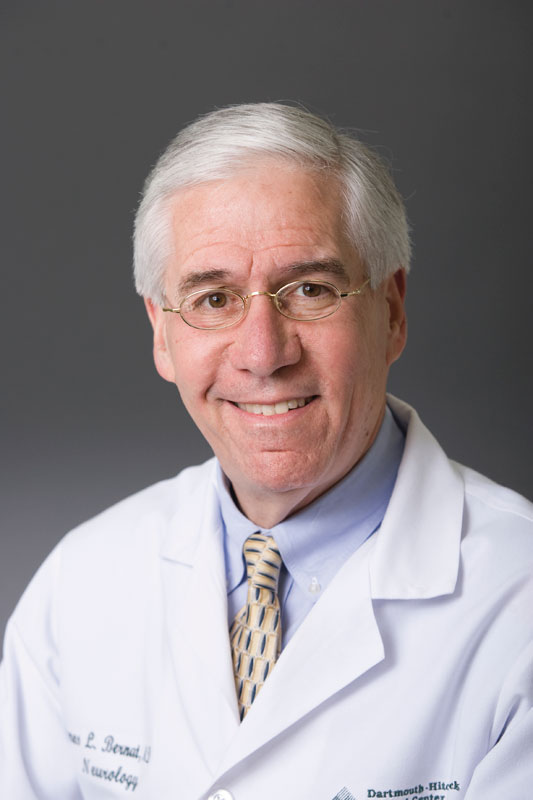 "Jim Bernat personifies a genuine commitment to enrich people's lives through discovery, learning, and healing," says DMS Dean Chip Souba. "He is not only a leader in his field, but an outstanding teacher and a caring clinician. We are grateful to the Frank family for their generosity which enables us to recognize people who are not only fine physicians but individuals who care deeply for others."

While many endowed chairs emphasize research, the Frank Professorship in Neuroscience celebrates the importance of preparing young physicians to become exceptional clinicians by supporting excellence in teaching and patient care. The Frank family members are long-time residents of New Hampshire who wanted to give back to Dartmouth Medical School and Dartmouth-Hitchcock, by funding this professorship, in recognition of the care Brigadier General Louis Frank and his wife, Ruth, had received over the years.

Dr. Bernat has been a member of the medical school faculty since 1976 and has held the rank of Professor of Medicine and of Neurology since 1989. He also serves as Director of the Program in Clinical Ethics at Dartmouth-Hitchcock and chair of the Bioethics Committee. Previously he served as Assistant Dean of Clinical Education at the medical school.

Dr. Bernat's scholarship in ethical issues in neurology has elevated him to prominence in American neurology and made him a leading commentator on high-profile ethics cases, especially those involving unconsciousness and brain death. Reporters from major media outlets - from The New York Times to People magazine - often invite his comments on major stories involving medical ethics. In 2005, he testified before the U.S. Senate on the Schiavo case. In 1997 and 2006, Dr. Bernat was one of several scholars invited to Rome to advise the Vatican on how to define death. He currently consults with the World Health Organization on international standards of death determination. In April, he will receive the American Academy of Neurology President's Award for his lifetime contributions to American neurology.

"I am humbled and honored to be the inaugural holder of this chair," Dr. Bernat said. "I am deeply indebted to the Frank family for their generosity, and pleased that they value both my scholarship in medical ethics and the critical importance of teaching young physicians how to become skilled clinicians."