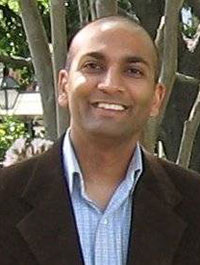 Lebanon, N.H.—A new study published by a team led by Samir Soneji, Ph.D., an assistant professor at The Dartmouth Institute for Health Policy and Clinical Practice (TDI) and Dartmouth's Norris Cotton Cancer Center, shows that disparities in mortality rates from colorectal cancer due to racial differences increased from 1960 through 2005, even as the overall colorectal cancer mortality rate declined in the same period.

The study, published in the new issue of the American Journal of Public Health, found that African-American patients have consistently worse stage-specific colorectal cancer survival rates than Caucasian patients and the gap in survival rate has widened over time.

The research assessed whether differences in stage-specific colorectal cancer survival rates reflected racial differences over four decades. To estimate mortality rates from colorectal cancer, the study used death counts from the Mortality Multiple-Cause-of-Death Data file, which include information from U.S. death certificates transmitted to the National Center for Health Statistics between 1960 and 2005. Mortality rates from colorectal cancer were determined by factoring death counts to exposure by age, gender, race, and year.

The data show that African-Americans consistently experience worse rates of stage-specific survival and life expectancy than Caucasians for both genders, across all age groups, and for localized, regional, and distant stages of colorectal cancer.

The study's three important findings include:

The study brings important implications to discussions of health care access and national health care policy. "Because racial disparity [in colorectal cancer mortality] is unlikely to be a product of differences in the accuracy of staging, tumor biology, or competing mortality, racial disparity seems most likely to be a product of differences in access to care or the quality of that care," the researchers conclude.

"Colorectal cancer is common, fatal--and preventable with screening," Soneji states. "We want to encourage the most appropriate screening for groups that would benefit the most, bearing in mind that the historical data show that racial disparities must be considered as policy and screening programs are developed." Racial disparities are likely to be a product of a broad set of social, biological, and environmental factors, Dr. Soneji notes.

Soneji's other research interests include variation in cancer care and outcomes, demographic modeling and simulation, and forecasting. He holds a Ph.D. in demography from Princeton University, an M.A. in statistics from Columbia University, and a B.S. in mathematics from the University of Chicago. He was formerly a Robert Wood Johnson Health and Society Scholar at the University of Pennsylvania, where he worked on projects investigating social inequality in preventive health care, mortality forecasting, Social Security projections, and avoidable death mortality.

The Dartmouth Institute for Health Policy and Clinical Practice is a dynamic force within Dartmouth College, dedicated to improving health care through education, research, policy reform, leadership improvement, and communication with patients and the public. More information is online at www.tdi.dartmouth.edu.