DMS Study: Treated or not, most survive common thyroid cancer 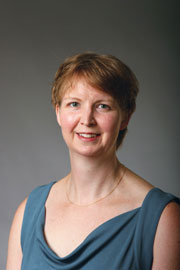 Hanover, N.H.—Dartmouth researchers Louise Davies, M.D., M.S., and H. Gilbert Welch, M.D., M.P.H., report that most patients with papillary thyroid cancer (PTC) survive almost equally long if the condition does not spread beyond the thyroid gland, regardless of whether they undergo treatment within the first year after diagnosis.

The findings appear in the May issue of Archives of Otolaryngology - Head & Neck Surgery, a journal of the American Medical Association (AMA). PTC often turns up in autopsies of individuals who died of other causes, according to the article by Davies, an assistant professor of surgery at Dartmouth Medical School (DMS), and Welch, a DMS professor of medicine and of community and family medicine. They studied cancer cases and individual treatment data from National Cancer Institute registries, then tracked causes of death through the National Vital Statistics System.

"Studies published as early as 1947 demonstrated it, and more recently, a report has shown that nearly every thyroid gland might be found to have a cancer if examined closely enough," the authors write. "The advent of ultrasonography and fine-needle aspiration biopsy has allowed many previously undetected cancers to be identified, changing the epidemiology of the disease. Over the past 30 years, the detected incidence of thyroid cancer has increased three-fold, the entire increase attributable to papillary thyroid cancer and 87% of the increase attributable to tumors measuring less than 2 centimeters."

Davies and Welch both belong to the Outcomes Group at the Department of Veterans Affairs Medical Center in White River Junction, Vt., where Davies treats veterans with head and neck cancer, and both conduct research at The Dartmouth Institute (TDI) for Health Policy and Clinical Practice in Hanover. In this study, they identified 35,663 patients with PTC that had not spread to the lymph nodes or other areas at diagnosis. Of these, 440 (1.2 percent) did not undergo immediate, definitive treatment. Over an average of six years of follow-up, six of these patients died of their cancer.

"These data help put management decisions about localized papillary thyroid cancer in perspective," the authors write. "[C]linicians and patients should feel comfortable considering the option to observe for a year or longer cancers that fall into this category. When treatment is elected, the cancers in this category can be managed with either hemithyroidectomy [removal of part of the thyroid] or total thyroidectomy [removal of the complete gland], and the prognosis will be the same."

Davies and Welch conducted the study with the support of a Research Enhancement Award from the Department of Veterans Affairs, and of the Robert Wood Johnson Faculty Scholars Program. The article follows up on research that led Davies and Welch to conclude, in a 2006 study published by the Journal of the American Medical Association (JAMA), that "increased diagnostic scrutiny has caused an apparent increase in incidence of cancer rather than a real increase," and that "[f]urther studies will be needed to determine if a more cautious diagnostic approach -- perhaps simply providing follow-up for symptomatic thyroid nodules--is worthwhile."