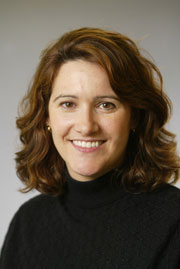 Hanover, N.H.—After examining the responses of thousands of northern New England middle-schoolers to questions about their movie-viewing habits over two years, Dartmouth pediatricians Susanne E. Tanski, M.D., M.P.H, and James D. Sargent, M.D., are reporting that parents who steer their sons and daughters away from R-rated films usually prevail against peer pressure on kids to drink alcohol.

The study, part of a long line of research at Dartmouth Medical School (DMS) into the influence of mass-media in general and adult-themed movies in particular on risky behavior of young people, appears in the May issue of the Journal of Studies on Alcohol and Drugs.

"We think this is a very important aspect of parenting, and one that is often overlooked," says Sargent, a professor of pediatrics at Dartmouth Medical School (DMS) who served as principal investigator in the study. "The research to date suggests that keeping kids from R-rated movies can help keep them from drinking, smoking, and doing a lot of other things that parents don't want them to do."

Collaborating with researchers from the University of Oregon and the University of Michigan, Tanski and Sargent examined follow-up calls to 3,577 fifth- to eighth-graders who - in an initial, paper-and-pencil survey of 4,655 middle-schoolers - reported never drinking alcohol. Over the next 13 to 26 months, trained telephone interviewers reached 2,406 of the never-drinkers. Of that group, 3 percent said they had started drinking when questioned in the follow-up phone survey. That compared with 19 percent of their peers who'd said at the outset that their parents "sometimes" let them see R-rated films, and one-quarter of middle-schoolers who'd said their parents allowed such movies "all the time."

While observing that one could argue that parents who restrict access to R movies are simply more careful in general - keeping tabs on their children's friends or making sure their kids have no access to alcohol at home - the researchers say they also asked questions gauging the youngsters' perception of parents' responsiveness and ability to set and enforce limits. Even with such factors considered, the team still found a link between exposure to R-rated movies - 90 percent of which show characters drinking alcohol - and the likelihood of early consumption of spirits.

Sargent adds that other research -- such as a study he and another team published earlier this year -- suggests that children who see R-rated movies become more prone to 'sensation seeking' and risk taking.

"We think seeing the adult content actually changes their personality," Sargent says, adding that PG-13 movies, as well as many TV shows, also frequently portray drinking and other adult situations. The American Academy of Pediatrics currently recommends that children watch no more than one to two hours of "quality" media, including movies, TV, and videos, each day.

"The sample within this study area is a regional, largely white group," the researchers write in the study. "Additional studies in multiethnic samples are warranted."