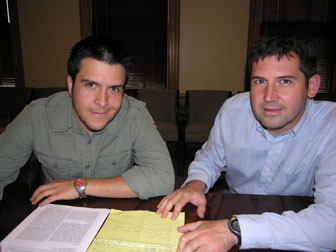 Hanover, N.H.—In a feat of trickery, Dartmouth Medical School immunologists have devised a Trojan horse to help overcome ovarian cancer, unleashing a surprise killer in the surroundings of a hard-to-treat tumor.

Using nanoparticles—ultra small bits—the team has reprogrammed a protective cell that ovarian cancers have corrupted to feed their growth, turning the cells back from tumor friend to foe. Their research, published online July 13 for the August Journal of Clinical Investigation, offers a promising approach to orchestrate an attack against a cancer whose survival rates have barely budged over the last three decades.

"We have modulated elements of the tumor microenvironment that are not cancer cells, reversing their role as accomplices in tumor growth to attackers that boost responses against the tumor," said Dr. Jose Conejo-Garcia, assistant professor of microbiology and immunology and of medicine, who led the research. "The cooperating cells hit by the particles return to fighters that immediately kill tumor cells."

The study, in mice with established ovarian tumors, involves a polymer now in clinical trials for other tumors. The polymer interacts with a receptor that senses danger to activate cells that trigger an inflammatory immune response.

The Dartmouth work focuses on dendritic cells—an immune cell particularly abundant in the ovarian cancer environment. It does take direct aim at tumor cells, so it could be an amenable adjunct to other current therapies.

The cooperating cells hit by the particles return to fighters that immediately kill tumor cells.

Dendritic cells are phagocytes—the soldiers of the immune system that gobble up bacteria and other pathogens, but ovarian cancer has co-opted them for its own use, he continued. "So we were trying to restore the attributes of these dendritic cells—the good guys; they become Trojan horses."

Cancer is more than tumor cells; many other circulating cells including the dendritic phagocytes converge to occupy nearby space. The dendritic cells around ovarian cancer scoop up the nanocomplexes, composed of a polymer and small interfering RNA (siRNA) molecules to silence their immunosuppressive activity.

Nanoparticle incorporation transforms them from an immunosuppressive to an immunostimulatory cell type at tumor locations, provoking anti-tumor responses and also directly killing tumor cells. The effect is particularly striking with an siRNA designed to silence the gene responsible for making an immune protein called PD-L.

The new findings also raise a warning flag about the use of gene silencing complexes in cancer treatment. Inflammation is a helpful immune response, but the researchers urge caution when using compounds that can enhance inflammation in a patient already weakened by cancer.

Ovarian cancer, which claims an estimated 15,000 US lives a year, is an accessible disease for nanoparticle delivery, according to the investigators. Instead of systemic administration, complexes can be put directly into the peritoneal cavity where the phagocytes take them up.

Samples of human ovarian cancer cells show similar responses to nanoparticle stimulation, the researchers observed, suggesting feasibility in the clinical setting. It could be part of a "multimodal approach," against ovarian cancer, said Conejo-Garcia also a member of the Dartmouth's Norris Cotton Cancer Center. "The prevailing treatment is surgical debulking, followed by chemotherapy. Our findings could complement those because they target not the tumor cells themselves, but different cells present around the tumor."

The work was supported by grants from the National Institutes of Health, including the National Cancer Institute and National Center for Research Resources, a Liz Tilberis Award from the Ovarian Cancer Research Fund, and the Norris Cotton Cancer Center Nanotechnology Group Award.

Read an interview of Jose Conejo - Garcia with the Ovarian Cancer Research Fund.