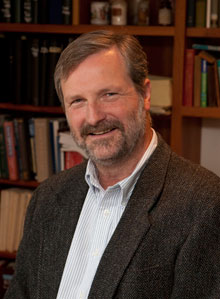 Hanover, N.H.—Dr. Jay Dunlap, professor and chair of genetics at Dartmouth Medical School, was elected to the National Academy of Sciences, considered the country's premier scientific society. He is internationally recognized as a pioneer in cracking apart the field of clock biology, opening a window on the rhythms of life.

Dunlap was among the 72 national members and 18 foreign associates from 15 countries elected for their distinguished and continuing achievements in original research. Their selection was announced April 28 at the annual meeting of the Academy.

In groundbreaking work, Dunlap has advanced understanding of the genetic basis of the circadian clock, the biological chronometer controlling the 24-hour cycle that governs when we sleep or awake and influences diverse behavioral and metabolic disturbances, including jet lag and depression.

Using a classic genetic system, the common bread mold fungus, Dunlap has helped delineate the molecular gears common to most living clocks. His watershed studies of the genes that time how the fungus, called Neurospora, controls its daily growth cycle have set the stage for investigations in many animals, including humans.

Dunlap cloned the first microbial clock gene in 1986 and over the subsequent two decades, has pieced together the intricate web of clockwork genes, proteins and feedback loops that drive circadian rhythms, often working with colleague Dr. Jennifer Loros, a professor of biochemistry. The two coined the term clock-controlled genes in 1989, were the first to demonstrate how light and dark cycles reset the circadian timepiece, and then explained the influence of temperature in regulating the clockwork.

Within the past decade the Neurospora system has been developed as a research model in which, as a result of Dunlap's efforts, mutations have been described in nearly 80 percent of the organism's 10,000 genes.

A pioneer in cracking apart the field
of clock biology.

The Genetics Society of America awarded Dunlap the 2009 George W. Beadle Medal for outstanding contributions to the genetics community. He has authored over 130 scholarly publications and co-edited review volumes as well as a widely used textbook on circadian biology, "Chronobiology: Biological Timekeeping. " His lab has mentored a generation of successful graduate students and fellows, 17 of whom currently hold faculty positions. While spearheading innovative genomics projects in his field, Dunlap also built genetics at DMS as the inaugural chair of the department that was created in 1999.

Dunlap earned dual BS degrees from the University of Washington and a PhD in biology from Harvard, then carried out postdoctoral research in molecular genetics at the University of California, Santa Cruz. He joined the DMS faculty in 1984.