Critical Determinant for Whether or Not Pregnant Uterus Contracts Found 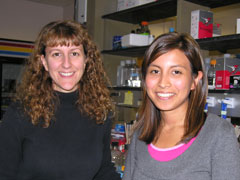 Hanover, N.H.—Timing is crucial when a woman is about to give birth, and now Dartmouth Medical School researchers have discovered a key player that prepares the pregnant uterus for labor. The findings, published online Nov. 20 in the Journal of Clinical Investigation, help resolve the paradoxical presence of a muscle relaxant just when the uterus needs to begin forceful contractions.

They have implications for inducing normal labor and preventing preterm labor, according to Dr. Kathleen A. Martin, assistant professor of surgery and of pharmacology and toxicology. "We found dual and contradictory roles for the muscle relaxor prostacyclin in priming the uterus for optimal contractions," said Martin, who led the research team that included Dartmouth faculty, as well as graduate, medical and undergraduate students.

Prostacyclin, a fatty acid that protects blood vessels, is also a vasodilator: it relaxes smooth muscle cells along vessel walls to help maintain circulation or prevent clots. While studying prostacyclin action, the investigators made a surprising find: the potent muscle relaxant enhanced contractility. Then, applying their discovery to the pregnant human uterus revealed some intriguing interplay between the levels of prostacyclin and strength of contractions.

The pregnant uterus is in a resting state until it begins to ready itself for the rhythmic contractions that propel the fetus down the birth canal. About two weeks before the onset of labor the uterus goes through an activation process that involves the smooth muscles in its middle layer -- the myometrium. During this myometrial activation, the machinery needed for contractions is switched on, including the receptor for the hormone oxytocin that stimulates labor contractions.

"We now think prostacyclin is important because it's actually playing a causal role in the activation process. At the same time prostacyclin makes uterine smooth muscle relax, it activates signaling pathways that turn on a whole different program of gene expression," says Martin. "The initial response is to relax muscle, but the long-term response is to turn on genes that allow muscles to contract. Then, when a strong pro-contractile hormone like oxytocin comes in, the uterus is ready."

Studies of labor have been by limited by availability of the critical patient population - women about to give birth -and no good animal models exist. The researchers obtained tiny strips of uterine tissue (a few millimeters long), with consent, from women who underwent elective Cesarean section before labor started.

Co author Dr. Roger C. Young, a former DMS professor now at the University of Vermont, had developed a culture method that overcame a hurdle for measuring intact uterine smooth muscle, which rapidly lose the ability to contract in the lab. Suspending the sample strips with weight to give some tension, the investigators found that the tissues maintain contractility for up to a week. Treating the samples with prostacyclin for 48 hours before stimulating them with oxytocin results in a stronger contraction, they determined, because the muscles' contractile apparatus is in place.

The findings offer clues for inducing labor with administration of oxytocin, according to Martin. "If women haven't undergone myometrial activation they probably won't respond well. But, pre-treating them with prostacyclin and then bringing in oxytocin might be more efficient and also spare some women, particularly those with urgent medical issues, from C-sections."

"This is an exciting time for uterine biology," says Kristina M. Fetalvero, lead author and a DMS graduate student in pharmacology and toxicology. "We knew who the different players were, and now we can see what they do, studying the molecular mechanisms of how they turn on or what keeps them off."

The team demonstrated that prostacyclin turns on a gene expression program by activating a cellular regulator called protein kinase A. "Our data suggest that while prostacyclin has an acute relaxing effect, it is also ramping up this new gene program, sending it into a more contractile state," Fetalvero says."

Hopefully, Martin adds, a better picture of what happens in normal labor, will shed light on the pathways to target to help arrest and prevent premature labor.

The other authors, all of Dartmouth, are Pei-Sheng Zhang, Maureen Shyu, Benjamin T. Young, and John Hwa.