Allergy Patch Tests: Children and Adults Have Differences and Similarities 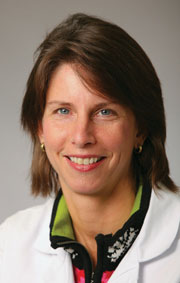 Hanover, N.H.—Adults and children who are referred for patch testing for allergies appear equally likely to have allergic contact dermatitis, although they tend to react to different allergy-causing substances (allergens), reports a team headed by a Dartmouth dermatologist. The multi-center study, published in the October Archives of Dermatology, helps provide a useful guide to an allergen "hit list" for children, say the investigators.

Skin reactions to allergens are common among children. They can occur both on areas of the skin that come in direct contact with an allergen (contact dermatitis) and on areas that aren't directly affected (atopic dermatitis). Children suspected of contact dermatitis are often referred for patch testing, in which skin is exposed to various allergens affixed to a plaster tape to identify those that provoke a reaction.

Dr. Kathryn A. Zug, associate professor of medicine at Dartmouth Medical School, and colleagues analyzed results from 391 children age 18 and younger who underwent patch testing between 2001 and 2004. They compared results of the pediatric population to a group of 9,670 adults (age 19 and older) who were tested during the same time period.

Our study showed significant differences between the frequency of individual positive reactions to allergen patch tests in children and adults.

Children and adults tested positive for at least one allergen at approximately the same rate (51.2 percent for children vs. 54.1 percent for adults). "Our study showed significant differences between the frequency of individual positive reactions to allergen patch tests in children and adults; children were more likely to have reactions to nickel, cobalt, thimerosal [a preservative] and lanolin, whereas adults were more likely to have positive reactions to neomycin, fragrance mix, M. pereirae (balsam of Peru [a balsam tree extract used as an alternative therapy]) and quaternium 15, [a presrvative]" the authors write.

The common positive reactions in children are expected given their probable patterns of exposure to sources of offending substances. Some children reacted to supplemental allergens not included in common patch test series (15 percent) or in commercially available tests (39 percent). Children with a positive reaction were more likely to have atopic dermatitis included as one of their final diagnoses than were adults (34 percent vs. 11.2 percent), the investigators found.