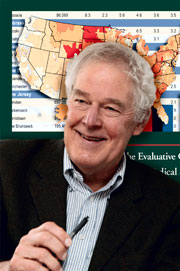 Hanover, N.H.—Dr. John E. Wennberg, a Dartmouth Medical School outcomes pioneer, today received the 2008 Gustav O. Lienhard Award from the Institute of Medicine for "reshaping the US health care system" to focus on objective evidence and outcomes rather than physician preference as the basis for treatment decisions, and for his efforts to empower patients with greater input on decisions about their own care.

The 23rd recipient of the Lienhard Award, which comes with a $25,000 cash award, Wennberg is the founder and director emeritus of the Dartmouth Institute for Health Policy and Clinical Practice, and the Peggy Y. Thomson Chair for the Evaluative Clinical Sciences at Dartmouth Medical School. He is widely recognized for pioneering research on health care outcomes and patient-directed care. Using small-area analysis, a strategy developed by Wennberg and his colleague Alan Gitlesohn, he showed that rates of procedures in areas with similar populations varied greatly, and determined that the variations stemmed primarily from differences in physicians' treatment preferences. His discoveries challenged the medical profession to acknowledge that most care was based on tradition or opinion rather than on objective evidence of what is most effective.

He founded and served as the first editor of the Dartmouth Atlas of Health Care, which has reported on patterns of end-of-life care, inequities in the Medicare reimbursement system, and the underuse of preventive care. Wennberg's research on measuring the outcomes of care helped shape the legislation that created the Agency for Health Care Quality and Research within the U.S. Department of Health and Human Services. "Pay for performance"—the idea of basing physician reimbursement on meeting performance standards, which is gaining wide acceptance—grew out of a model Wennberg devised.

John Wennberg is duly renowned for his impact on the evolution of health care delivery in the United States.

—Dr. Harvey V. Fineberg, president of the Institute of Medicine

In addition, Wennberg has been a champion of sharing information about the benefits and risks of therapeutic options with patients so that they can participate in decisions about their care. He co-founded, with colleague Albert Mulley, the Foundation for Informed Medical Decision Making, a nonprofit corporation providing objective scientific information to patients about their treatment choices. He also co-founded, with James Weinstein, the Center for Shared Decision Making at Dartmouth-Hitchcock Medical Center, the first entity in the United States to promote patients' involvement as partners in treatment decisions. His work has inspired an international movement promoting informed patient choice.

In their nomination of Wennberg, Uwe E. Reinhardt, professor of economics at Princeton University, and Dr. Michael Zubkoff, chair of the Department of Community and Family Medicine at DMS, wrote that Wennberg "has almost single-handedly altered the debate in health policy. For more than 30 years, Dr. Wennberg's research and advocacy have focused on spending. He was the first to suggest—and to show conclusively—that more care is not always best and that patient outcomes are often better with more conservative treatment. His vision 30 years ago started to unravel the mystery of an irrational national health care system."

Wennberg received his MD from McGill Medical School, Montreal, Canada, in 1961, and his MPH from the Johns Hopkins School of Hygiene and Public Health, Baltimore, in 1966. He joined the DMS faculty in 1980 as a professor of medicine and community and family medicine. He is a member of the Institute of Medicine and the Johns Hopkins University Society of Scholars. He has received numerous awards, including the Association for Health Services Research's Distinguished Investigator Award, the Richard and Hinda Rosenthal Foundation Award in Clinical Medicine, the Baxter Foundation's Health Services Research Prize, and, with Albert Mulley, the Picker Institute Award for Advancement of Patient Centered Care.

Established in 1970 under the charter of the National Academy of Sciences, the Institute of Medicine provides independent, objective, evidence-based advice to policymakers, health professionals, the private sector, and the public. The Lienhard Award is funded by an endowment from the Robert Wood Johnson Foundation. Additional information about the Lienhard Award can be found at www.iom.edu/lienhard.