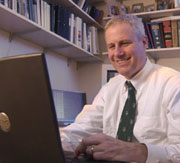 Hanover, N.H.—Self-guided treatment for depression could soon be only a mouse click away.

A Dartmouth Medical School physician and former astronaut is part of a National Space Biomedical Research Institute (NSBRI) team developing an interactive, multi-media program to manage depression and other psychosocial problems in space and it could be brought down to earth, especially where access to health care is limited.

Long-duration spaceflight can be tough on astronauts, according to Dr. Jay Buckey, professor of medicine at DMS, who is co-investigator of the project. "While astronauts are not particularly prone to psychological problems, the environment is very demanding. On a mission, they face a lot of challenges that could lead to depression," he said.

This and other psychosocial problems can pose a threat to crew safety and mission operations. Even though the depression treatment is under development for NASA, it could be spun off for use on Earth, said project leader Dr. James Cartreine a Harvard Medical School research psychologist in clinical informatics at Beth Israel Deaconess Medical Center in Boston. Cartreine was a member of the DMS Interactive Media Lab when the collaboration began.

"This project has great potential as a self-guided treatment for many people," said Cartreine, a member of NSBRI's Neurobehavioral and Psychosocial Factors Team. "Depression is the number one cause of disability days in the United States, but it's not only about days lost. Depression also results in presenteeism - showing up for work but not really working."

The Virtual Space Station is based on proven treatment programs and is a very helpful way to work on problems in general.

The Virtual Space Station will make effective therapeutic depression treatment more easily accessible to astronauts aboard the International Space Station and proposed missions to the moon and Mars, according to the researchers. Currently, astronauts have audio and video access to psychologists only when communication links are available.

The multi-media approach for depression includes graphics and video featuring a psychologist who leads the user through a straightforward process called Problem-Solving Treatment. The system provides feedback based upon the information provided when answering a series of questions.

The first step of the process is to make a problem list and select a problem on which to work. The second and third steps are setting goals and brainstorming ways to reach them. The final two steps are assessing the pros and cons of possible solutions and making an action plan to implement them. The program also helps users plan and schedule enjoyable activities, which people who have depression often stop doing. Additionally, the program provides preventative and educational information on depression.

Cartreine and Buckey, who received input from 29 current and former astronauts while designing the Virtual Space Station, said some other benefits include portability and privacy. "It can be delivered to the International Space Station on a flash drive and run directly from that drive, so that the astronaut has complete control over his or her data," Cartreine said. "The system is private and secure. The user is the only one who can share the information with others."

An early version of the depression treatment system was beta-tested on research stations in Antarctica, which is used as an analog to long-duration spaceflights due to its isolation from the rest of the world, length of stay and team composition. Cartreine said feedback from that early test run has been positive, and a clinical evaluation of the latest version on 68 Boston-area volunteers is about to begin.

"We plan to study the program's ability to treat depression," he said. "We are looking for people who are similar to astronauts, such as people in the technology industry."

Eventually, the researchers want to adapt the system for use in different settings, giving people access to treatment they may not have now. For instance, people with depression often seek treatment from their primary care physician, so it could be adapted for use at the doctor's office or in a person's home.

The system could also be beneficial in rural areas where clinical help is in short supply or nonexistent. Other possible locations include schools, social service offices, places of worship, military bases, prisons, commercial ships, oil rigs and underwater research stations.

The self-guided treatment project is part of the NSBRI Neurobehavioral and Psychosocial Factors Team portfolio, which includes studies on and development of countermeasures for stress, anxiety, interpersonal conflict and fatigue.