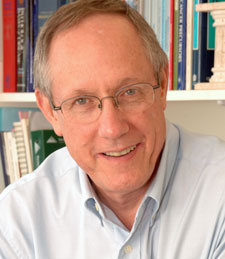 Hanover, N.H.—Dartmouth Medical School has been awarded $19 million to continue leadership of a national trial that is exploring a safe and cost-effective way help prevent colorectal cancer, one of the most common cancers in the US.

The five-year award from the National Cancer Institute renews support for a multi-center study to determine if calcium or vitamin D lower the risk of growths that can become cancer in the colon or rectum. Benign tumors known as colorectal adenomas or polyps often grow in older adults and can evolve into cancer if left in place.

The trial, led by Dr. John Baron, professor of medicine and of community and family medicine, builds on extensive work over the past decade on the anti-cancer potential of the two nutritional supplements in the large bowel.

"Both vitamin D and calcium are safe and relatively inexpensive, so if they are effective in interfering with cancer development in the large bowel, they could have substantial benefits on public health," points out Baron.

Both vitamin D and
calcium are safe and
relatively inexpensive, so...they could have substantial benefits
on public health.

DMS is headquarters for coordinating the participating clinical centers, including Dartmouth-Hitchcock Medical Center (DHMC) and the Norris Cotton Cancer Center. The investigators have enrolled about 2,200 subjects who had at least one large bowel adenoma removed in the four months prior to entering the trial and no known remaining polyps.

The volunteers are randomized to take either calcium carbonate (1,200 mg calcium/day), vitamin D (1,000 IU/day), both agents or placebos. Women can choose to be randomized to calcium alone or calcium plus vitamin D. Follow-up colonoscopy occurs at either three or five years after the qualifying exam.