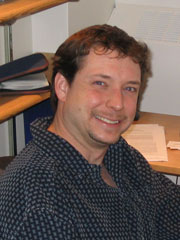 Hanover, N.H.—Distinct genetic profiles can discern different groups of patients with scleroderma, a vexing autoimmune disease in which the body turns against itself, Dartmouth Medical School researchers report. Their discovery of distinguishing molecular subtypes within the disease offers new insight into the complexity of a poorly understood and hard to treat illness and opens a window for better diagnosis and targeted therapies.

Scleroderma is a chronic connective tissue disorder that can cause skin hardening and internal organ dysfunction and affects four times as many women as men. It captures a range of related conditions, from mild, localized to the skin, to systemic and life threatening.

Patient complications are variable and hard to predict, explains Dr. Michael Whitfield, assistant professor of genetics at DMS, who headed the research team. "We show that we can divide the patients even more finely than what is currently done clinically, and found a clear association between disease severity and gene expression." The results were published online, July 16 in PLoS One, an open-access journal of the Public Library of Science.

"We show for the first time that we can classify patients with a systemic autoimmune disease into different groups by gene expression patterns alone," says Whitfield "Now that we have discovered new subsets at the molecular level, we can begin to map the genetic pathways to see if we can we use these signatures to predict who will progress to different clinical endpoints." The researchers hope to begin to understand which patients should be treated aggressively, for example, and which drugs benefit which patients.

"Scleroderma constitutes one of the most mysterious of human diseases. The studies by the Whitfield group are particularly noteworthy as they constitute the first genetic categorization of scleroderma," says Dr. William Rigby, a DMS rheumatolgist who treats scleroderma. "Since no one understands the basic processes that cause scleroderma, it has been largely categorized by the distribution of clinical findings, such as the location of skin thickening (torso relative to the hands). These studies, utilizing objective measures, establish that distinct genetic programs account for the ways this disease manifests itself and hold out the possibility for an improved ability to treat and induce remission of this potentially fatal disease," adds Rigby, who is a professor of medicine and of microbiology and immunology.

The work continues a longtime collaboration with Dr. Kari Connolly at the University of California, San Francisco, which has a large scleroderma patient population. It builds on a map of skin that Whitfield and colleagues created using gene expression—which genes are turned on—to delineate differences among scleroderma patients beyond obvious symptoms.

We show that we can divide the patients even more finely than what is currently done clinically, and found a clear association between disease severity and gene expression.

The map was based on skin samples from patients with diffuse scleroderma, the most severe form of the disease, and healthy controls. Two skin samples were taken from each patient: one from affected skin in the forearm, and another from an unaffected lower back area, which though seemingly healthy, also showed aberrant genes, demonstrating the disease was truly systemic when the biopsies were taken.

The new research is considered the largest scleroderma gene expression study to date. The investigators analyzed gene activity in 28 patients with varying types of scleroderma and six healthy control subjects, using skin biopsies from an arm and back.

Whitfield compares the molecular classification to how breast and other cancers have been characterized. "Our goal was to go into a disease of completely different etiology, but plagued by similar problems of clinical heterogeneity and to quantify disease subsets at the gene expression level."

The researchers used DNA mircoarrays to measure gene expression and computational algorithms to select subsets of genes that can classify the patients. The technology offers an objective way to survey and analyze thousands of genes at a time and look at inherent gene programs in the skin samples, which like most cells, contain all the human genetic information.

The patients split into four major groups, each with a distinct gene profile. One group with severe disease had a proliferation signature, indicating dividing cells. An inflammatory group included several forms of the disease with a signature for T cells and other characteristics of inflammation. Another signature was limited to patients with more serious vascular and less skin involvement, while a fourth, normal-like group included healthy controls as well as patients diagnosed as having the more severe diffuse disease, and limited disease. The researchers also identified a gene signature that highly correlated with increased severity of skin disease.

The results, according to Whitfield, help tie together basic and clinical science for scleroderma and could potentially be used as an outcome measure in clinical trials. Studies are in progress, he adds, to help define response signatures for specific therapies and determine which drugs will work best for different patient profiles.