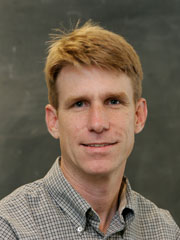 Hanover, N.H.—Cell biologist Dr. Charles Barlowe has assumed a new leadership role as chair of Dartmouth Medical School's Department of Biochemistry. His appointment was effective July 1, coinciding with the end of his term as dean of graduate studies for Dartmouth College. He succeeds T.Y. Chang, Ph.D. who elected to step down after heading the department since 2000 and who will return to devoting his time to his research on cholesterol.

"I am delighted to welcome Dr. Barlowe to his new medical school responsibility and extend my gratitude to Dr. Chang for his exemplary service as department chair," said Dr. William R. Green, DMS dean, in announcing the appointment.

Barlowe's laboratory studies how proteins travel within cells, focusing on the molecular mechanisms of a yeast transit system. He has mapped the biochemical pathway for this transport network and helped to reveal how enzymes and hormones are safely shuttled through the cell to reach the surface or other destinations. His stature in the cell trafficking field was recognized with a 2007 National Institutes of Health MERIT Award that provides fast-track funding for top investigators to continue their research.

Barlowe joined the DMS faculty in 1994, after receiving his PhD from the University of Texas, Austin and doing postdoctoral training at the University of California, Berkeley. His honors include being named a Pew Scholar in the Biomedical Sciences (1996-2000) and a Damon Runyon-Walter Winchell Cancer Fund Fellow (1990-1993). He has been a professor and served as Dartmouth dean of graduate studies since 2004.