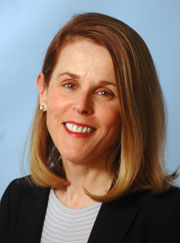 Hanover, N.H.—A Dartmouth Medical School researcher has won a Ladies' Home Journal Health Breakthrough Award for landmark work that benefits women and families. Paula Schnurr, a DMS research professor of psychiatry and the deputy executive director of the National Center for PTSD for the Department of Veterans Affairs (VA), in White River Junction, Vermont, was honored for her studies of posttraumatic stress disorder (PTSD) in female veterans.

She is one of four recipients of the third-annual awards, which recognize medical professionals who have transformed their area of health to dramatically help women and families, and will be featured in the magazine's August issue, on sale July 8.

"We at Ladies' Home Journal believe passionately in showcasing and applauding the work of these brilliant doctors, who apply their genius and tireless effort in bringing breakthroughs to the world that will help care for and cure countless American families," says Diane Salvatore, editor in chief.

Schnurr received the Marianne J. Legato Gender-Specific Medicine Award. Triggered by a traumatic event, PTSD plagues half its sufferers for life, leaving them emotionally numb, subject to insomnia, nightmares and flashbacks, and unable to face reminders of their trauma. Though both men and women are at risk for PTSD, women are twice as likely to develop it.

In a study of 284 veteran and active-duty women, Schnurr and her team found that PTSD symptoms were twice as likely to decrease dramatically in those women treated with prolonged exposure therapy, where the patient repeatedly recounts the traumatic event until her emotional response eases, than in those who received present-centered therapy (PCT), which focuses on a patient's current problems. Schnurr's findings drove the VA to support a national training program in prolonged-exposure therapy, which had not previously been widely used in its giant health-care system or in civilian health-care settings.