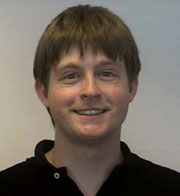 Matthew Reilley was among the 42 talented students who were named 2008 (HHMI)-National Institutes of Health (NIH) Research Scholars to spend a year doing research. The program encourages medical, dental and veterinary students to combine their interests in research and medicine, and aims to help develop professionals who can build bridges between the laboratory and the patient.

Reilley, who has completed his second year at DMS, is from Massachusetts and graduated from Washington and Lee University with degrees in computer science and neuroscience. He and fellow award recipients are also known as Cloister Scholars because they live at a refurbished cloister on the NIH campus in Bethesda, MD, during their training. They will visit several NIH labs before choosing a research project to pursue with an NIH mentor.

These students will one day be on the front lines between biomedical research and the public.

"These students will one day be on the front lines between biomedical research and the public," said Peter J. Bruns, HHMI's vice president for grants and special programs. "We want them to have a strong background in research and then pursue it as a career."

The HHMI, a non-profit medical research organization that ranks as among the nation's largest philanthropies, plays a powerful role in advancing US biomedical research and science education.