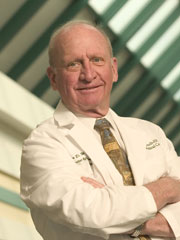 Hanover, N.H.—Dr. Peter D. Williamson, a world-renowned neurologist and epilepsy expert, distinguished for his pioneering work in evaluating patients for epilepsy surgery, died Wednesday, June 4, at his home in Lyme, NH, from cancer. He was 71.

Williamson was founder and director of the Comprehensive Epilepsy Center at Dartmouth-Hitchcock Medical Center and a professor of medicine at Dartmouth Medical School. The Epilepsy Center, founded in 1991, has been designated by the National Institutes of Health as one of the nation's top epilepsy referral centers in the nation.

Nancy Formella, president of Mary Hitchcock Memorial Hospital, speaking on behalf of the Dartmouth-Hitchcock Office of the Presidents said, "Peter was a genuine contributor - to the lives of his patients, to his colleagues, and to the future of medicine. He and [his wife] Susan took a very active role in enriching our lives through their community volunteerism and professional endeavors. He leaves an important legacy, for which we are all very grateful."

"[My wife] Susan and I are saddened by Peter's death," said Dartmouth President James Wright. He was a distinguished member of the faculty. The medical community has lost a faithful advocate, and Dartmouth has lost a loyal friend. Peter Williamson was an enthusiastic supporter of Dartmouth Medical School, Dartmouth-Hitchcock Medical Center, and Dartmouth College. He was a leader in his Dartmouth Class of 1958, which is having its 50th reunion this weekend. He energized his class and the Transforming Medicine Campaign. Through his work and because of his philanthropy, Peter's Dartmouth medicine legacy will continue for generations. We will all miss him."

Peter's service to the Medical School took many forms and we sincerely appreciate his passionate devotion to Dartmouth medicine. I am grateful for his hand in shaping the Medical School and for everything he and Susan have done to strengthen our future.

The Transforming Medicine Campaign vice-chairs Al Griggs and Peter Fahey will assume leadership of the Campaign. "Peter set a very high bar for us all, saying frequently that he believed we could reach $300 million in the Campaign," noted Fahey. "His belief in the excellence of Dartmouth medicine and its ability to transform medicine was inspirational."

"We are forever grateful to Peter and Susan for expressing their commitment to the Medical School and Medical Center so boldly with their generosity and leadership," said Griggs. "Above all, I know Peter wanted to create a record so that it could be broken. It's that sort of passionate and personal leadership that I will always remember about Peter. We will miss him."

After receiving his undergraduate education at Dartmouth in 1958 and medical degree from the University of Southern California School of Medicine in 1963, Williamson trained in internal medicine at the New York Hospital ('63-'65) followed by neurology training at Yale ('65-'68). His military service was at Walter Reed Army Medical Center ('68-'71). He returned to Yale where he was a pioneer in starting an epilepsy surgery program at the VA-Yale Epilepsy Center.

One of his significant successes in the early 70s was development of intracranial depth electrodes that made it possible to record very low magnitude electrical signals from inside the brain. He moved to Dartmouth in 1991, where he has expanded his valuable work by creating the Dartmouth-Hitchcock Comprehensive Epilepsy Center. Williamson was also a founding member of the Medical School's Board of Overseers. In 2002, the American Epilepsy Society awarded him the J. Kiffin Penry Award for Excellence in Epilepsy Care.

Williamson also believed deeply that epilepsy surgery should be available to anyone in the world who needed it. He initiated a strong collaboration with the University of Uruguay, lending his expertise to establish a local state-of-the-art epilepsy program.

In addition to his vocational endeavors, Williamson excelled at a number of avocational interests as well. His accomplishments included flying single-engine airplanes, collecting and driving vintage autos, snow and water skiing, sailing small and large boats, and many other action sports. One of his antique autos won the "Best in Show" prize at the prestigious Pebble Beach Concours D'Elegance 2006 vintage car show.

Funeral arrangements are pending. The family has requested that gifts in Williamson's memory support cancer research and patient services at Norris Cotton Cancer Center by contributing to The Bradley Bunch Team, part of the 2008 Prouty Bike Ride and Challenge Walk.

Checks may be made out to "The Friends of NCCC." Please indicate the gift is in memory of Peter Williamson and mail to Michele Clark, DMS/DHMC Office of Development, 1 Medical Center Drive, Lebanon, NH 03756.