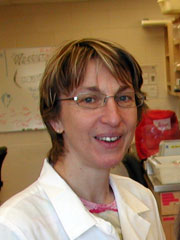 Hanover, N.H.—Dartmouth Medical School geneticists have pinpointed the terminator controls in a pathway for cells destined to live or die, switching on a killer gene when needed to assure the development of a healthy animal.

Their discovery links two biological processes essential for the vitality and diversity of an organism: asymmetric cell division, which creates daughters that are different, and apoptosis, which prompts unwanted or defective cells to self-destruct. It has implications for manipulating stem cells that divide unevenly to self-renew or differentiate and cancer cells that defy their predestined death.

"Asymmetric cell division makes sure you generate daughters that have different fates and apoptosis is programmed death that eliminates superfluous cells," said Conradt. "Both processes are so important for a functional organism and we show for the first time that they directly connect. Factors that cause asymmetry directly regulate a killer gene."

The researchers looked at a round worm gene called egl-1, which implicated in apoptosis and related to a well known gene group, the BCL2 family, that is involved in several human cancers and perhaps other diseases. The worm C. elegans is a convenient model whose blueprint of cells at every stage of development has been precisely documented.

A worm cell called NSM neuroblast divides to form two daughters: one is large, the other is small; the smaller daughter dies, always at the same time after division, while the larger lives and becomes a nerve cell, the NSM. Building on her prior studies of egl-1, Conradt with Hatzold identified the molecular machinery that regulates the uneven cell division and terminates the smaller sister.

Although present in both sisters, the egl-l killer gene is on only in the smaller sibling that dies. One protein called CES-1 blocks the expression of egl-1 and two other proteins activate it. Both daughter cells have the activator complex to turn on the killer gene, but only the larger survivor has the suppressor protein that keeps off egl-l, the researchers observed.

"So," said Conradt, "The presence or absence of this egl-1 repressor, CES-1, determines which sister will live and which will die."

Factors that cause asymmetry directly regulate a killer gene.

Then, by using worm mutants with an altered gene for the CES-1 protein, the team found a connection between asymmetry and apoptosis. In these mutants, the NSM neuroblast no longer divided unequally and both same-size daughters inherited the suppressor protein and therefore survived. This demonstrated that factors involved in asymmetric cell division also distribute the suppressor to the larger daughter where it prevents death.

In other words, Conradt said, "the suppressor protein CES-1 has two jobs: it's not only the regulator of this killer gene in the daughter, but a component of the pathway that plays a role in setting up the initial asymmetry in the mother cell."

Conradt and Hatzold identified two additional proteins, CES-2 and DNJ-11, that control the CES-1 suppressor and are required for the asymmetric division of the NSM neuroblast and the death of the smaller daughter cell.

There are hints that counterparts in mammalian systems may play similar roles.

Stem cells give rise to two different kinds of progeny: another stem cell and a cell that can differentiate to form a neuron, muscle cell or any other tissue. But the stem cell may also destroy one of its daughters when it doesn't need any neurons, for instance, or stem cells.

In mammals, a CES-2-like factor has been implicated in stem cell function and both CES-2- and CES-1-like factors have been shown to control apoptosis. Conradt speculates that the role of the pathway in asymmetric cell division and apoptosis might be conserved.

"We propose that the pathway we discovered might actually be involved in asymmetric division of stem cells and the killing of one of the daughters if necessary to regulate the number of differentiated cells or reduce the stem cell pool." CES-2- and CES-1-like factors have previously also been implicated in certain human leukemias, so the newly found pathway may offer clues to controlling the fate of cancer cells.