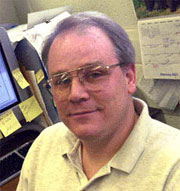 Using a promising model they devised to study the stubborn lung infections that plague cystic fibrosis (CF) patients, Dartmouth Medical School researchers have discovered strikingly strong resistance to conventional antibiotics, and suggest that the intense therapy needed to combat infection may contribute to its persistence.

The novel tissue culture system can help provide insights into the unique interactions between the tenacious microbial colonies and their host and lead to the development of effective therapies to eradicate the damaging infections.

The work, published online for the April Infection and Immunity, and cited as a "Spotlight" article, was led by DMS professors George O'Toole of microbiology and immunology, and Bruce Stanton of physiology. It builds on the expertise of Dartmouth's interdisciplinary Lung Biology and Cystic Fibrosis Research Development programs that focus on the common inherited disorder. Study coauthors are postdoctoral fellows Greg Anderson and Sophie Moreau-Marquis.

Patients with cystic fibrosis are vulnerable to chronic lung infections of the bacterium Pseudomonas aeruginosa, which establishes itself in the airways and defies treatment. The bacteria cluster in communities called biofilms, and are far more impervious to a broad range of antibiotics than their counterparts swimming about freely.

Biofilms can grow many places--on metal or plastic or in animal tissues -- but most studies to date have focused on nonliving surfaces as models for medical implants, catheter lines or artificial joints, where the biofilm populations are relatively common.

"This is really the first model system to look at biofilms on airway cells and a model for understanding interactions between bacteria and the host in the context of cystic fibrosis. We think formation of biofilms on airway cells and this high level of intrinsic resistance in part explains why antibiotic treatment fails in patients," said O'Toole.

The genetic defect in cystic fibrosis causes abnormally profuse mucous production that clogs the lungs, providing a slimy environment for the bacterial biofilms to breed. Therapies can improve lung function, and reduce, but do not clear the infections, which typically begin in teen years or earlier. Biofilm pockets escape treatment, becoming more harmful over time.

The immune response patients mount entails recruiting cells that produce inflammation. "This same mechanism the body normally uses to kill bacteria also can damage host tissue if immune responses are excessive and long-term," O'Toole explained. "So partly due to chronic immune response and partly to factors the bacteria make, there is progressive lung damage, impairing function, leading to respiratory failure and shortened lifespan."

The DMS team developed a model for biofilm formation on bronchial epithelial cells, using cells derived from a CF patient with the most common mutation - a missing amino acid. They allowed airway cells to grow, infected them with P. aeruginosa to colonize as biofilms, then tested their response to tobramycin, the antibiotic routinely used against the infections.

The most striking aspect of the airway models was their high antibiotic resistance, far exceeding levels in the plastic or glass surfaces used for implant models, O'Toole noted. It took 25 times more tobramycin to kill the P. aeruginosa biofilms grown on the airway cells than was needed for the same communities grown on plastic.

"The biofilms we see on airway cells are resistant to antibiotic levels 10 times greater than what can be delivered to a patient. The most tobramycin that can get into the lung of CF patients is about 1,000 micrograms/ml and biofilms have a resistance to greater than 10,000," O'Toole said.

Adding to the complexity, genetic analysis of the antibiotic-treated biofilm colonies indicated that tobramycin regulates genes involved in bacterial virulence. The researchers identified a gene mutation that may influence the tenacity and toxicity of biofilms on airway cells.

The next steps are to use the model system to delineate the basic biology to help understand why these bacteria are so resistant, especially on airway cells, and to test therapeutics, O'Toole said. "One of the rationales we're excited about is the preclinical aspect, before things go into a patient, to test to see how effective they are."

Additional studies on the advantages of the system are in press.