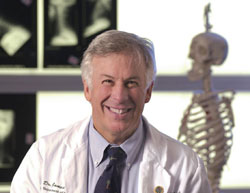 HANOVER, NH—Individuals suffering from a common back condition known as spinal stenosis improve more with surgery than with non-surgical treatment, according to a multi-center, multi-state trial led by Dartmouth clinician-researchers. However, the study also reveals that patients who choose not to have surgery are likely to improve over time.

The research, published in the February 21 New England Journal of Medicine, is the third in a series of study results from the Spine Patient Outcomes Research Trial (SPORT.) The seven-year, $21 million trial is led by Dr. James N. Weinstein, professor and chair of the departments of Orthopaedics at Dartmouth Medical School and Dartmouth-Hitchcock Medical Center, and director of the Dartmouth Institute for Health Policy and Clinical Practice.

Weinstein, a practicing spine surgeon, said the spinal stenosis study will be significant for millions of patients and their doctors. "Spinal stenosis is the most common reason for lumbar spine surgery in patients over 65," he said. "For the first time, we have an evidence base on which to advise our patients."

The SPORT studies were launched in 2000 to look at the three most common back conditions leading to surgery: herniated disk with sciatica; spinal stenosis; and a variation of spinal stenosis where one vertebra has slipped forward over the other, a condition known as spondylolisthesis. Although $24 billion is spent annually on back surgery, until SPORT there had not been a large scale randomized trial conducted to find out how effective operative procedures were when compared with non-surgical therapies for these three conditions.

For the first time, we have an evidence base on which to advise our patients.

But says Weinstein, it's significant that almost none of the non-surgical patients got worse without an operation. And on average, they reported small improvements in all measures.

"What we now know and can share with our patients is that they have a choice. If they choose surgery, they will improve greatly. But if their preference is not to have surgery, their condition is not likely to worsen and they will see some improvement over time," he said.

Spinal stenosis is a narrowing of the spinal canal that causes a progressive squeezing of the nerves, leading to pain in the buttocks or legs when walking or standing. It is most commonly seen in adults over 60. When surgery is performed, excess bone, ligament, and soft-tissue are removed to allow more room for the nerves, a procedure called a laminectomy. Lumbar spinal fusion may, in rare cases, also be performed to prevent instability of the spine. Non-surgical treatments for spinal stenosis include physical therapy, exercise, chiropractic, epidural injections, and anti-inflammatory drugs.

Centers participating in the study in addition to those of authors listed above were: NYU/Hospital for Joint Diseases; Nebraska Foundation for Spinal Research, Omaha; University Hospitals of Cleveland/Case Western Reserve University; Washington University, St. Louis; Maine Spine and Rehabilitation, Scarborough.