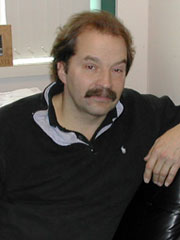 HANOVER, NH—Dr. Randolph (Randy) Noelle has been named acting chair of the Department of Microbiology and Immunology, announced Dr. William R. Green, dean of Dartmouth Medical School. "I am pleased that Dr. Noelle has agreed to serve while I fulfill my term as dean," said Green, professor and chair of microbiology and immunology, who assumed the deanship last month.

A member of the department since 1984 and a professor since 1995, Noelle has a distinguished record of scholarship and service. He is recognized nationally and internationally for his work on a biochemical-signaling cascade in the immune system to help unlock treatment approaches for a spectrum of immune and inflammatory disorders as well as organ transplant rejection in humans.

His laboratory has identified a novel membrane protein (CD154) on the surface of helper T lymphocytes. Noelle uses a variety of disease and transplantation models in mice to study how to target this molecule to ameliorate autoimmune disease and graft rejection. He holds several NIH research grants, including a MERIT award, made to top grant recipients.

I am pleased that Dr. Noelle has agreed to serve while I fulfill my term as dean.

He received his bachelor's degree from SUNY at Stony Brook in 1974 and his PhD from Albany Medical College in 1980. He was a post-doctoral fellow at the University of Texas Health Science Center at Dallas from 1980 to 1984 before joining DMS.

More on Noelle's work can be found on the Microbiology and Immunology web site at: http://geiselmed.dartmouth.edu/microbio/faculty/noelle-r.shtml