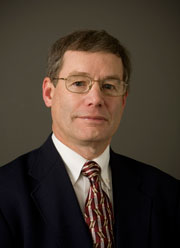 HANOVER, NH—Dr. William Green, chair and professor of microbiology and immunology, has been named dean of Dartmouth Medical School (DMS). Green takes over for Dr. Stephen Spielberg, who stepped down in early January to devote more time to his research and international health initiatives. He will serve as dean for a non-renewable term. Green's service will extend through an organizational review of DMS and through the search and appointment of the subsequent dean.

"I'm energized by the talent surrounding me at DMS," says Green. "The students, faculty and staff are all top notch, and I look forward to working with them in my new role as dean."

A distinguished scientist who has been at DMS since 1983, Green received his BS degree from the University of Michigan and his PhD from Case Western Reserve University. His post-doctoral research was carried out first at Johns Hopkins, and then at the Fred Hutchinson Cancer Research Center and the University of Washington in Seattle.

I'm energized by the talent surrounding me at DMS. The students, faculty and staff are all top notch.

In recent years Green's laboratory has been primarily exploring immune responses to retroviral diseases, including leukemia and immunodeficiency. He also studies new approaches to a vaccine platform to protect against poxvirus infections, including smallpox. He is the principal investigator for a National Institutes of Health COBRE (Centers of Biomedical Research Excellence) grant, which supports Dartmouth's Center for Molecular, Cellular, and Translational Immunological Research. He has served as chair of the Department of Microbiology and Immunology since 2002, and he is actively involved with numerous professional organizations and journals, including the American Association of Immunologists and the Association of Medical School Microbiology and Immunology Chairs. Green's lab will remain active during his time as dean, and he will return to his previous position when his term is complete.

"I am grateful to Dr. Green for his willingness to take on this significant assignment," says Dartmouth Provost Barry Scherr. "And, we thank Dr. Spielberg for his service and enthusiastic work on behalf of the Medical School. He leaves the school well positioned to take advantage of the opportunities ahead."

During Spielberg's tenure as dean since 2003 he paid particular attention to the quality of medical school education. Under his leadership, the new PhD program in experimental and molecular medicine was established, and the school developed and implemented DMEDS, a nationally recognized on-line system to track educational goals for students against established clinical competencies. He also created new affiliations for the clinical education programs, and forged a major alliance with the California Pacific Medical Center.

Spielberg, a pediatrician, will continue his work in advancing therapeutic treatments for children. These efforts continue a long-standing research passion, which is reflected both in his 2006 presidency of the American Society for Clinical Pharmacology and Therapeutics as well as his service as chair of the Scientific Advisory Board, National Institute of Child Health and Development Pediatric Pharmacology Research Unit Network. He is internationally recognized for his research and in 2007 he received an Award in Excellence in Clinical Pharmacology from the Pharmaceutical Research and Manufacturers of America Foundation. Spielberg will also continue his efforts with the Global Health Initiative, a joint program with Dartmouth's Dickey Center that involves both educational and research initiatives through links with Muhimbili University in Dar es Salaam.