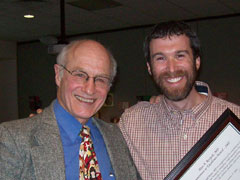 HANOVER, NH—A Dartmouth pediatrician is the inaugural recipient of the Alan A. Rozycki Commitment to Excellence Award for his contributions to care of children at DHMC and in the community. Dr. Todd M. Poret received the 2007 award, named in honor of long-time Dartmouth pediatrician Dr. Alan Rozycki, who is retiring after 35 years of service at Dartmouth-Hitchcock Medical Center.

"He best exemplifies Dr. Rozycki's extraordinary efforts in always making a positive difference in the lives of the children, families and the Upper Valley community," said Dr. Henry Bernstein, Dartmouth Medical School professor of pediatrics, who established the award.

Rozyki was "the face of Primary Care Pediatrics," added Bernstein, chief of general academic pediatrics at Children's Hospital at Dartmouth (CHaD). The award recognizes Rozycki's commitment and efforts by highlighting individuals whose extraordinary work had an impact on the quality of the patient experience in general pediatrics at CHaD and showcasing successful innovations, strategies and performance, according to nomination criteria.

Poret was cited as providing "expert medical care with a tremendous amount of compassion". Besides his amazing knowledge of medicine, Poret combines a "sense of humor and humanity", which "works to everyone's benefit," read descriptions. He was selected from nominees who included physicians, nurses, staff and volunteers.

Poret completed his pediatric training at DHMC, after graduating from the University of North Carolina School of Medicine. He also served an additional year as the chief pediatric resident before joining CHaD in general academic pediatrics.

Rozycki, an alumnus of Dartmouth College and DMS, received his MD from Harvard and joined the DMS faculty in 1970.