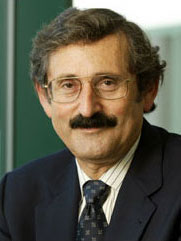 HANOVER, NH—The discovery that a molecule drives local tumor growth, as well as its ability to flourish and spread, opens a new window for understanding and treating cancer by taking aim at both cancer cells and their surrounding environment.

A Dartmouth Medical School team led by Dr. Murray Korc found that a member of a common molecular family plays a role in the progress of a particularly resilient and aggressive pancreatic cancer, and that its influence is not restricted to that cancer. Their research was reported in the January Journal of Clinical Investigation.

The work builds on studies by Korc, professor and chair of medicine at DMS, and colleagues at University of California, Irvine on glypican molecules, which interact with many growth factors implicated in cancer. A receptor called glypican-1 (GPC1) is abnormally abundant in pancreatic ductal adenocarcinoma, the most common and deadliest form of pancreatic cancer, often diagnosed after it has spread or metastasized.

Human pancreatic cells deprived of their own GPC1 had reduced growth in culture, as well as when they were transplanted into immunocompromised mice (known as athymic for the lack of a thymus gland) that don't reject human cancer cells, the researchers demonstrated.

This raises the possibility for therapeutic manipulations that will target GPC1 in both cancer cells and in patients to slow tumor growth and to prevent metastasis.

Since GPC1 is common in many tissues, the researchers wanted to determine its role in the host environment, or how it functions in a patient. Knocking out the gene for GPC1 in mice, they created an athymic mouse population that lacked GPC1; then they introduced cancer cells.

Host mice devoid of GPC1 had smaller pancreatic tumors that were less angiogenic and less metastatic when exposed to tumor cell lines with normal levels of GPC1. The metastatic potential of mouse melanoma (skin cancer) cells injected into mice with no GPC1 was also greatly decreased, the researchers found.

Zeroing in on mechanisms that allow metastasis to occur more efficiently -namely, presence of GPC1—in either the cancer cells or the host, offers new options against cancer. The approach seems promising because, added Korc, "Host-cancer interactions are becoming significant as clinicians and cancer researchers realize that the environment around cancer cells is just as important as the cancer cells themselves."