EXPERT INSIGHT: The limitations of personal genetics
A conversation with geneticist Jason Moore 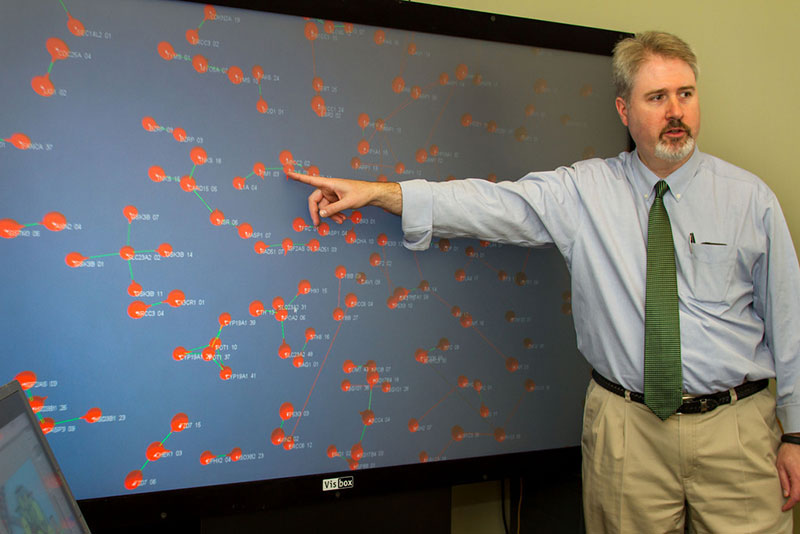 Jason H. Moore, PhD, is Third Century Professor, a professor of genetics and of community and family medicine at Geisel, and director of the Institute of Quantitative Biomedical Sciences (iQBS).

Hanover, NH—In late November, the Food and Drug Administration (FDA) ordered 23andMe, a company that provides personal genetic testing, to stop selling its genetic test for health-related purposes. The FDA expressed concern that the company had been advertising the potential health benefits of its tests but had not provided any evidence to support the validity of the information it provided to customers. The data provided by 23andMe might, for example, indicate that a customer was at an increased risk of breast cancer. But, the FDA pointed out, there could be serious consequences if that information was incorrect or misinterpreted by the customer.

The FDA's move prompted strong reactions, both for and against the decision. Geneticist Jason Moore, whose research focuses on untangling complex relationships between different genes and between genes and the environment, has often written about the implications of his work for personal genetic testing. As a bioinformatics expert, Moore appreciates the value of an abundance of data, but he is also well aware of the importance of drawing accurate conclusions from that data. Dartmouth Medicine editor Amos Esty asked Moore for his thoughts on the FDA's decision.

Dartmouth Medicine: What was your reaction when you heard the news about 23andMe?

Moore: I'm actually surprised it didn't happen sooner. I know the FDA has been working with 23andMe for a long time to try to get them to self-regulate to some degree. That just didn't happen, so the FDA eventually felt the need to shut down at least the part of their service that's providing health-related information.

DM: Did you think it was a good decision on the part of the FDA? 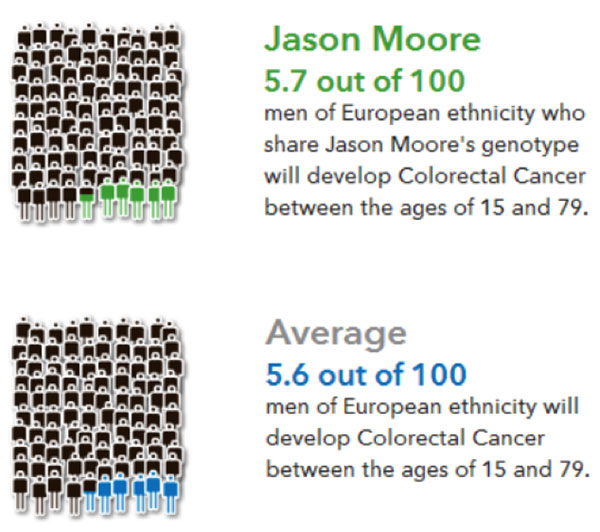 Jason Moore signed up for 23andMe's services so that he could use them as an example of personal genetic tests when he teaches. Until November 2013, the data provided by 23andMe included information about potential health risks. Moore's data, for example, showed a very slightly increased risk of colorectal cancer compared to other men of European ancestry.

MOORE: On the one hand, I agree with the FDA that some regulation of these services is needed, especially since they're so new and they have health consequences. Also, there are a lot of other companies that are springing up to provide these kinds of services. So I think it was probably a good thing for the FDA to step in and set some expectations for these companies before the situation gets out of control.

On the other hand, 23andMe is breaking new ground here and helping to advance the field and to educate the public about genetics and the importance of genetics. I've used the service for several years now and have been very happy with it. I think they do as good a job as anybody could do right now.

I also see the side of the general public. There are quite a few people who are upset about this decision because they feel that the government is impinging on their rights to have access to their own genetic information.

DM: What have you used 23andMe for?

MOORE: I use it mostly for teaching purposes. I originally signed up for it so I could pull out my own genetic information and use it as real examples when I teach medical students and graduate students here at Dartmouth. I've incorporated my own 23andMe results into my classroom lectures, and that's been very useful to illustrate the service and what it provides.

But I think there's a deeper issue here. I think a key point that's being missed in coverage of this issue is that when 23andMe presents a health-related report about a genetic variant in a gene, they're getting that from the published scientific literature. And in my opinion, the literature is very incomplete and very immature. We've only taken a superficial look at the role of genetic variation in determining susceptibility to common diseases. We've really only scratched the surface by looking in very simplistic ways at those relationships. We haven't had a chance yet to really dive into the data in a meaningful way to explore how the environment modifies those genetic risks and how the rest of the human genome modifies those genetic risks. There's a lot of complexity in the data that we just haven't tapped into yet. I think the literature base that 23andMe is using to provide health-related reports is very premature; it's very superficial. At least for common human diseases, 23andMe has very limited value at this point. That's the main reason I can see the FDA side, is that there's very limited utility and the risks perhaps outweigh the benefits at this point in time. That doesn't mean that won't change in five or ten years.

DM: So what a company like 23andMe can realistically tell a person with any certainty is a very small amount of information.

MOORE: Right. There just is not much clinically useful information there to provide to the public.

With that said, I think 23andMe has played a very useful educational role in that they provide genetic information to people, they explain it through their website in a clear way, and they provide some useful and valuable information--things like genetic ancestry testing. I think that's fairly accurate and useful and interesting to people who are uncertain about their background, especially people who are adopted or who are of mixed ancestry and don't know where their families came from, for example. Certainly for genealogy I think it's useful for tracking down relatives. 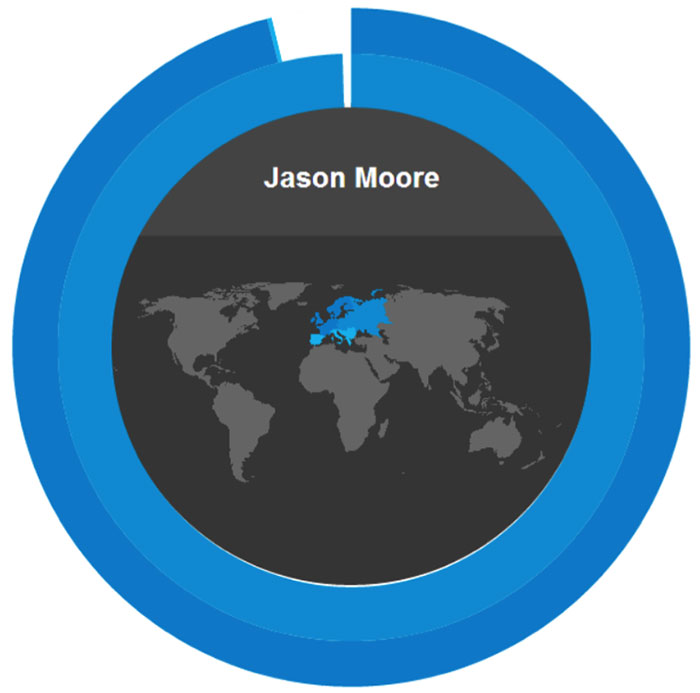 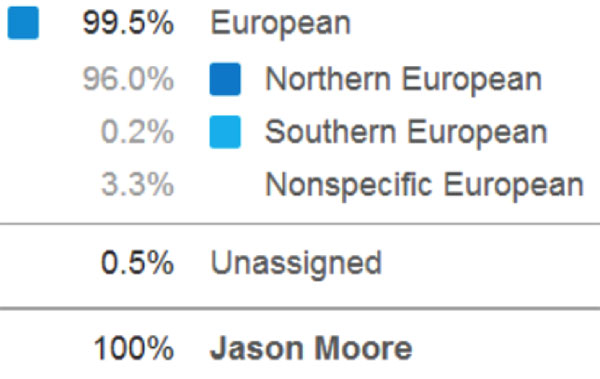 In November, the FDA ruled that 23andMe must stop providing health-related information out of concern about the validity of the data. Despite that decision, 23andMe continues to provide data on genetic ancestry. Moore's genetic profile, for example, reveals that his ancestry is 99.5% European and that slightly less of his DNA than average derives from Neanderthals.

Genetics is going to touch all of us clinically at one time or another. There's no doubt about that. So I think getting the public educated about genetics now is probably a good thing, and that's probably the biggest benefit that 23andMe has had, just starting a dialogue about genetics, having people understand what a gene is and how a gene might influence disease. Those are all very positive things.

DM: 23andMe is based in Silicon Valley and has ties to Google. You have developed software and you need a lot of computing power for your research. Does the fact that the company comes from a tech background rather than a clinical background affect how you view it?

MOORE: One of the exciting things for me when 23andMe got started was thinking about the database that they were creating. And that's their business model. Their business model is not selling the tests--they lose money on selling the tests. The business model is getting a million people in a database with all their genetic information, all their clinical and other biological trait information, and then selling that data to pharmaceutical companies. My hope as an academic researcher has always been that I would be able to get access to that, apply our software and computational algorithms to that database, and to make the kind of new discoveries that we desperately need. That was the exciting thing for me was just thinking about the data.

MOORE: Privacy is a real concern. I don't think it's a big issue, but it's something we need to think about. The people who are ordering these tests need to be educated about the privacy and security risks to themselves, but as long as they're aware of that and go into these kinds of tests knowingly, I think that's okay.

DM: Do you have concerns that the FDA decision will slow down the process of educating people about genetics and improving these kinds of tests?

MOORE: It will definitely slow it down, but I don't think that's necessarily a bad thing. I think we've moved too quickly into this. It's too premature. We really shouldn't be providing people health-related information until we're sure it's accurate and useful. We need to ensure that people know what to do with the information and that physicians know how to work with their patients with this information. This is serious business. The FDA regulates medical devices because they're potentially dangerous to people, and they see this as a type of medical device.

DM: At what point do you think the science might be able to support more definitive interpretations of the kind of data 23andMe was providing?

MOORE: We still have a lot of research to do about the role of genes in disease. I'm guessing it probably takes 20 years to really understand the data and the value of that data more deeply. There have been a number of studies coming out in the past few years showing genetic risk factors don't do any better than traditional risk factors at predicting who's going to develop disease in the future. So until we can show that genetic information is useful for predicting who's going to develop disease, I don't think we should be providing that as a service to people.