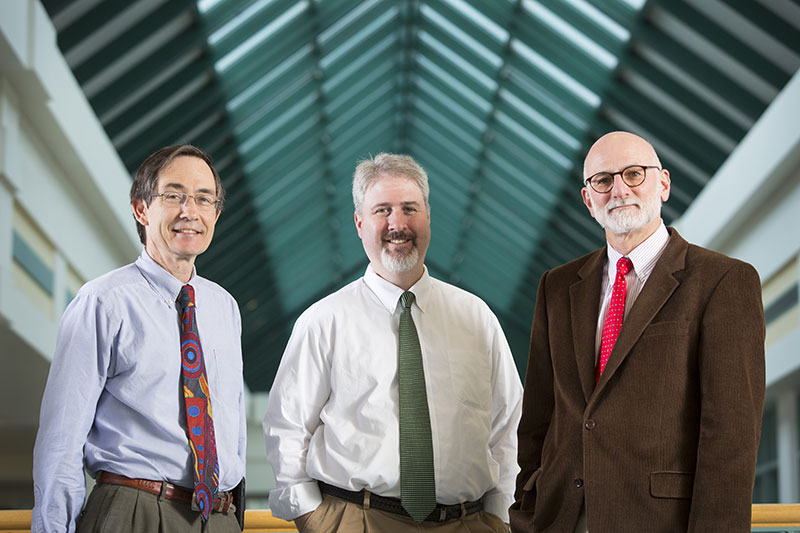 Christopher Amos (left), Jason Moore (middle) and Scott Williams (right) were part of a team that identified three genetic variants that influence body size and obesity in people with African ancestry. The three professors work for Geisel School of Medicine at Dartmouth and Norris Cotton Cancer Center.—Photo by Mark Washburn

Hanover, N.H.—Researchers from Dartmouth's Institute for Quantitative Biomedical Sciences (iQBS) and the Center for Genomic Medicine have helped to discover three unique genetic variations that influence body size and obesity in men and women of African ancestry. This study, a meta-analysis that examined 3.2 million genetic variants in over 30,000 people with African heritage for links to body-mass index or BMI—by professors Jason Moore, Christopher Amos and Scott Williams—was the largest ever done on this population to date. The study was published online in April 2013 by Nature Genetics, and will be printed in the journal's June 2013 issue. The large-scale genetic analysis demonstrated the utility of examining ancestrally diverse populations for clues as to why some groups seem more prone than others to physical problems such as obesity.

Nearly 50 percent of African-American adults in the U.S. are clinically obese (with BMI >=30), compared to 35 percent of non-Hispanic white adults[1]. One large U.S. study found that the incidence of morbid or extreme "class 3" obesity (BMI >=40) was highest among black women[2]. Obesity is a worldwide health epidemic, associated with higher cardiovascular disease, diabetes and mortality[3], and lower quality of life. The study done by Moore, Amos, and Williams—also from the Norris Cotton Cancer Center (NCCC)—and colleagues showed that people from different populations share similar genetic traits that impact body size (people with African ancestry shared 32 gene variants previously associated with BMI in European and Asian populations). Yet the study also revealed that people with African ancestry possess three genetic variations that work in concert with environmental factors to impact BMI. This knowledge may help scientists to understand, and clinicians to better prevent or treat, obesity in this population.

The authors agree that both genes and environment play a role in obesity. Jason H. Moore, PhD, Third Century Professor, professor of genetics, and director of the iQBS, says, "I would love to stress that this paper is really just a start or a foundation for understanding the role of genetic variation in obesity. We expect obesity to be influenced by hundreds, if not thousands of genes and many, many environmental factors. While some genetic variants are likely to increase or decrease weight in all people, most are likely to influence weight in specific people depending on their genetic background and their unique environmental history including diet, toxic metal exposure, exercise, etc. We will not fully understand the genetics of obesity until we can fully investigate these context-dependent genetic effects."

Christopher Amos, PhD, director of the Center for Genomic Medicine, associate director for Population Sciences at NCCC, and professor of community and family medicine, explains that in African-Americans, genes played a greater role in causing increased BMI than in Caucasians. He says, "To date, the effects in both African-American and Caucasian participants are too small to explain much of the genetic variability in obesity rates, and this may be because the variation reflects both genetic and environmental contributions. Since the environmental factors have not been studied, the actual contribution from genetic factors may be greatly underestimated." Subsequent research may clarify how much of a role genes play in promoting obesity, and what might be done to reduce its incidence in vulnerable populations.

Unfortunately, obesity is common not only among African-Americans but among Africans as well. Scott Williams, PhD, professor of genetics and founding director of the Center for Integrative Biomedical Sciences in iQBS, says, "In Africa, the World Health Organization has predicted several hundred million new cases of obesity by 2020 (from mid 2000s). In our cohort in Ghana, roughly 25-30 percent of women were obese by U.S. criteria. In South Africa it is even worse."

Williams studies diseases that are distributed among human populations to examine the role that genetics plays in health disparities. He conducts research on genetic variation within Africa, especially as it applies to diseases that affect people of African descent more frequently. This research "has helped to illuminate human evolutionary history and serves to bring disease presentation into an evolutionary perspective," says Williams.

Jason Moore, who is also associate director for bioinformatics at NCCC and a professor of community and family medicine, adds that, "The investment in infrastructure and personnel that we have put in place over the last three years at Dartmouth will make it possible for us locally to investigate these important human genetics questions."

The Geisel School of Medicine has established three important centers in three years:

Moore continues, "Christopher Amos, Scott Williams and I each bring unique research expertise to the table. Christopher Amos brings statistical genetics and genetic epidemiology; Scott Williams brings population and evolutionary genetics. I bring computational genetics and bioinformatics. Each of these pieces is critical for carrying out the kind of studies that are represented in this paper." The three authors currently work on grants to study the impact of genes on bladder cancer, visual diseases, cardiovascular diseases, infectious diseases, and Alzheimer's disease (Moore); lung cancer and melanoma (Amos); and cardiovascular disease risk, hypertension and preterm birth (Williams).

Following the publication of this paper, Jason Moore will chair the 6th Annual Integrative Biology Symposium April 23-24, hosted at Dartmouth by iQBS. The theme this year is obesity and human health.