Project 1 â Impact of infection microenvironment oxygen on fungal pathogenesis and host defense mechanisms. Oxygen plays a critical role in fungal-host interactions. From the host perspective, oxygen is not only used as the terminal electron acceptor to generate chemical energy needed to fight an infection, but as a weapon to generate toxic reactive oxygen species that can damage and kill invading fungi. Consequently, at the site of infection, oxygen is often limiting and in high demand by host and fungal cells. Our laboratory discovered that oxygen is limiting at the invasive pulmonary aspergillosis infection microenvironment ( Grahl et al. 2011 PLoS Pathogens). As oxygen is also a critical molecule for fungal metabolism, previous and ongoing studies have determined that the fungal response to a low oxygen environment, termed the hypoxia response, is essential for virulence and disease progression (Willger et al. 2008 PLoS Pathogens, Chung et al. 2014 PLoS Pathogens, Kowalski, C., Beattie SR et al. 2016 mBIO and others). From the host perspective, we discovered that a key transcriptional regulator of the host hypoxia response, hypoxia-inducible factor 1 alpha, is essential for control of invasive Aspergillus fumigatus infection (Shepardson et al. 2014 PLoS Pathogens). 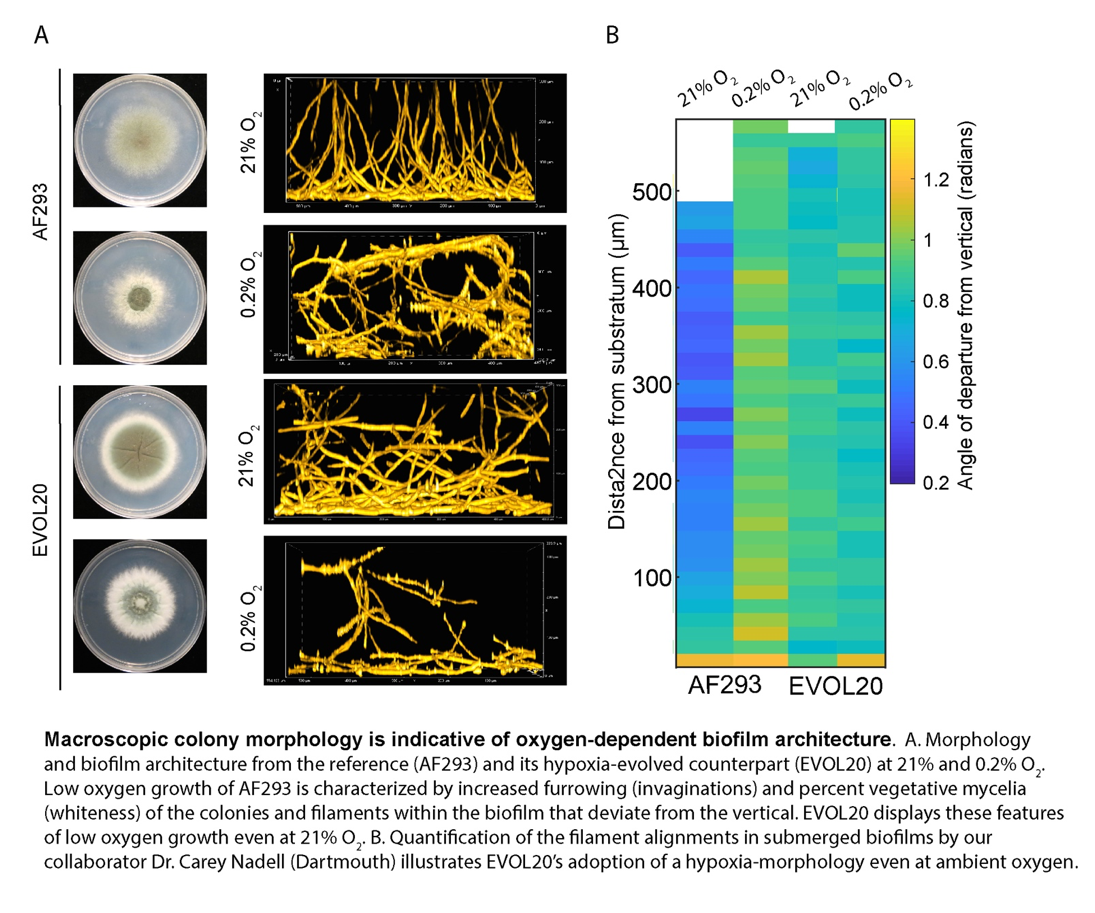 Ongoing studies are using an array of approaches including experimental evolution, forward and reverse genetics, and comparative functional genomics to identify mechanisms of fungal and host fitness in the face of dynamic infection microenvironment oxygen levels that impact disease progression and infection outcomes. Key questions include: how does fungal biofilm architecture impact oxygen acquisition? How do obligate aerobic fungi rewire metabolism in the face of oxygen depletion and how does this impact pathogenesis mechanisms? How do alterations in fungal hypoxia metabolism impact antifungal drug susceptibility? We are exploring these questions with key collaborators such as Dr. Jason Stajich at the University of California-Riverside, Dr. Carey Nadell at Dartmouth College, and Dr. Joshua Obar at the Geisel School of Medicine at Dartmouth. We are utilizing these basic research findings to impact disease outcomes, such as through modulating infection site oxygen availability with Dr. Jay Buckey (Dhingra et al. 2018 Antimicrobial Agents and Chemotherapy), or development of small molecule inhibitors with Microbiotix Inc. that target fungal hypoxia response pathways ( http://grantome.com/grant/NIH/R21-AI140878-01).

Project 3 â Impact of the Cystic Fibrosis lung environment on filamentous fungal pathogenesis and host defense responses. Cystic Fibrosis (CF) patients face long term and persistent infection with filamentous fungi such as Aspergillus fumigatus that leads to lung function decline. In particular, CF patients are at risk for development of the disease Allergic Bronchopulmonary Aspergillosis (ABPA) which is characterized in part by an extreme Th2 like inflammatory response in the face of persistent fungal growth in the airways. Mechanisms of A. fumigatus pathogenesis in the CF lung are poorly understood and treatments for ABPA are often unsuccessful. We are utilizing a series of longitudinal A. fumigatusclinical isolates from CF patients provided by the Cystic Fibrosis Research Foundation funded Dartmouth Translational Research Core to uncover genes driving A. fumigatus persistence in the CF lung. In addition, we are developing a new murine model of ABPA that is based on the ability of a recently isolated A. fumigatus strain to persistent in the lung. These tools will allow us to address fundamental questions related to fungal infection in CF patients such as how new CF therapeutics impact fungal and host defense responses.

Project 4 â Mechanisms of ocular drug-antifungal drug synergy for the treatment of fungal keratitis. Fungal keratitis is a devastating disease most commonly found in tropical and sub-tropical regions of the world. Infection of the eye with filamentous fungi such as Aspergillus and Fusarium species can lead to loss of vision. In collaboration with Dr. Michael Zegans at Dartmouth Hitchcock Medical Center and the Aravind Eye Hospital in India, we are exploring new approaches for the treatment of fungal keratitis. Recently, we discovered that commonly used ocular drugs have potential synergistic activity when combined with existing antifungals (Natamycin and Voriconazole) against Fusarium and Aspergillus species (Rees et al 2019 Antimicrobial Agents and Chemotherapy). Ongoing studies seek to define the mechanism of action of these ocular drugs against fungi and to utilize a series of clinical Fusarium keratitis isolates to better understand keratitis pathogenesis mechanisms in these increasingly common eye infections.