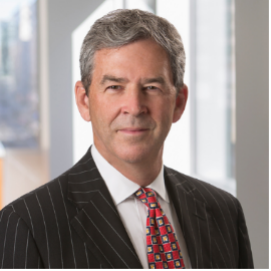 John Osborn is a Senior Advisor at international law firm Hogan Lovells, where he joined following two decades as a general counsel and corporate affairs executive with leading life sciences companies. John has been at the forefront of addressing many of the challenges faced by in-house counsel working for emerging life sciences and health care companies. In addition to serving as general counsel with two Fortune 1000 companies, he was responsible for government affairs and public policy, corporate communications, investor relations, and risk management. He continues to be an industry advocate on important public policy issues.

John has been a life sciences industry executive, lawyer, lecturer, writer and diplomat. Along with his position with Hogan Lovells, he also has been a healthcare industry advisor with Warburg Pincus, a venture partner with the medtech venture capital firm BioVentures (2018- ), and a board member of publicly traded and privately held companies in the specialty pharmaceutical, healthcare IT and biomedical device sectors.

For more than twenty years, John was a senior executive and general counsel with notable life sciences and healthcare companies, including Cephalon, McKesson Specialty Health/US Oncology, Dendreon and Onyx Pharmaceuticals. In these roles he was responsible for directing the legal and corporate affairs functions, including corporate governance, intellectual property, government relations and public policy, corporate communications, investor relations, risk management, internal audit, compliance and quality assurance. In his first in-house position, he was chief counsel for the medical imaging and European business units of the DuPont Merck venture company.

John was nominated by President George W. Bush in 2007, and confirmed by the United States Senate in 2008, to serve as a member of the bipartisan United States Advisory Commission on Public Diplomacy. After working on the presidential campaigns of George H.W. Bush, he served from 1989 to 1992 with the U.S. Department of State under Secretary James A. Baker III. Following law school, he clerked for Senior Circuit Judge Albert V. Bryan of the U.S. 4th Circuit Court of Appeals. Early in his career, he worked on Capitol Hill in the offices of former Congressman Jim Leach (R-Iowa), the late Senator John Heinz (R-Pa.) and the Congressional Budget Office.

John is an affiliate professor at the University of Washington School of Law, Seattle and lectures regularly at the University of Michigan Ross School of Business, Ann Arbor. He has held visiting research appointments at Oxford (socio-legal studies), Princeton (politics) and the University of California, Los Angeles (public health). He also has been a member of the board of governors of the East-West Center in Honolulu, a visiting scholar in East European Studies with the Woodrow Wilson International Center for Scholars, and an Eisenhower Fellow to Northern Ireland. John has been published widely in scholarly journals, in the press, and online at Forbes.com, STAT Health and Xconomy.