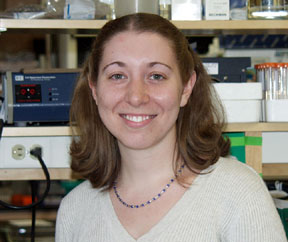 My project focuses on the role of the chromokinesin, Kid, in metaphase chromosome alignment in mammalian mitosis. We have shown that the human Kid protein is required for the generation of the polar ejection force--the away-from-the-pole force that acts on chromosome arms in mitosis--but is not essential for chromosome congression to the metaphase plate (Levesque and Compton, 2001 J. Cell Biol. 154(6)1135-1146). We are currently investigating the existence of redundant mechanisms that may help direct chromosome alignment in the absence of polar ejection forces. 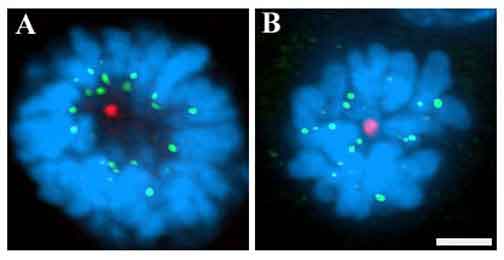 Fig. 1 (Eg5/Kid) Kid is required for generation of the polar ejection force. Human CFPAC-1 cells were microinjected with antibodies against either Eg5 alone (A) or both Eg5 and Kid (B) and were fixed and processed for immunofluorescence at least two hours after mitotic entry. Merged DNA (blue), centrosome (red), and centromere (green) images are shown. In cells injected with Eg5 specific antibodies alone (A), chromosomes are maintained away from the pole with their kinetochore regions pulled poleward and their arms pushed away from the pole. In cells coinjected with antibodies specific for both Eg5 and Kid, chromosomes cluster close to the pole indicating a loss of polar ejection force on chromosome arms. 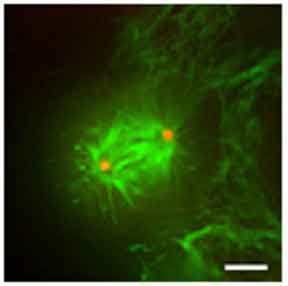