The Usherwood lab has a long-standing interest in T cell immune surveillance to both persistent viruses and tumors. Our major goal is to develop next-generation immunotherapies that can harness the power of T cell memory to effect long-term protection against cancer and prevent disease associated with persistent infections.

Early studies showed that the transfer of cytomegalovirus (CMV) or Epstein-Barr virus (EBV)-specific T cells into patients provided protection from disease associated with these viruses in immune suppressed transplant patients. This approach became applicable to tumor immunotherapy with the advent of chimeric antigen receptor technology, enabling the selective targeting of tumor cells. Most of the current advances in this field are focused on improving tumor cell targeting. However our focus is on improving the ability of the T cells to differentiate into memory cells that can survive and combat the tumor for long periods in the host. This is an important parameter, as several studies have shown tumor regression correlates with the persistence of adoptively transferred T cells in the patient. In addition there is evidence that memory T cells confer superior immunity to tumors. This may be due in large part to the fact that there are multiple factors in the tumor microenvironment that suppress glycolysis, which is essential for effector cell function, whereas memory cells rely mostly on oxidative phosphorylation for ATP production.

We are pursuing multiple strategies to re-program CD8 T cells such that they preferentially differentiate into memory cells. We then test the ability of these engineered T cells to persist in the host, and to protect from either tumor growth or persistent virus infection.

We lead the immuno-engineering program at Dartmouth, which brings together multiple investigators from the Immunology Program, the Thayer School of Engineering, and the Computer Sciences Department. The goal is to take a rational engineering approach to design and build T cells with superior function in vivo and the ability self-regulate to reduce potential treatment toxicity. Integral to this program is using electrical engineering methodology to represent the complex signaling networks in T cells. This will then be used to identity key strategies to manipulate the signaling network to favor the generation of memory cells. 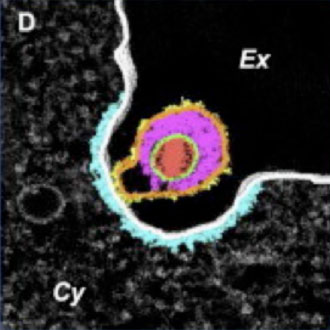 The large majority of the human population is infected by multiple persistent viruses. In some cases (HIV, Hepatitis C) this results in disease in all or a large proportion of those infected. However in many cases infection is clinically silent, and the infected individual suffers no adverse effects. In fact there is evidence suggesting persistent infection may be beneficial in aiding the immune response repel other infections. During viral persistence there is a dynamic equilibrium between the virus and the immune response. One of our missions is to understand this interplay, and to determine the effect that the persistent infection has upon responding T cells, and conversely how the T cell response keeps the infection under control for very long periods of time. An important long-term goal of the laboratory is to develop immunotherapies that can restore immune surveillance in immune suppressed patients who suffer disease due to the loss of immune control of persistent infection. These same strategies could potentially also be useful in other conditions such as enhancing immune surveillance against tumor metastasis.

Murine gammaherpesvirus 68 (MHV-68, γHV-68) is a highly tractable mouse model for gammaherpesvirus infection, where both the virus and the host can be manipulated genetically. The infection shares many biological features with the human gammaherpesviruses, the Kaposi's sarcoma associated virus (KSHV, HHV-8), and Epstein-Barr virus (EBV). Similarities are particularly close regarding the interaction between the infected cell and the T cell response. The virus has a tropism for B cells, where the virus establishes a long-term latent infection, which is normally well controlled by T-cell mediated immune surveillance. However when immune surveillance breaks down, which in this model happens as a consequence of a lack of CD4 T cells, spontaneous virus reactivation occurs in the lungs. This is analogous to the loss of control of virus-infected cells seen in AIDS patients where erosion of the CD4 T cell response leads to outgrowth of EBV or HHV-8-infected cells which can develop into tumors. 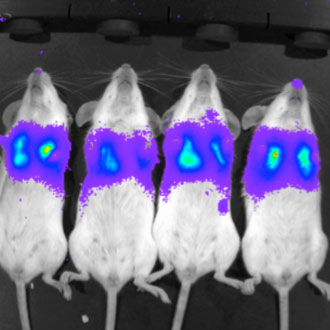 Mice infected intranasally with a luciferase-tagged MHV-68 virus. Virus replication in the lungs is clearly visible

Important MHV-68-related goals being addressed by the lab currently include: