We study the molecular mechanisms that underlie intracellular transport and seek to understand how proteins catalyze distinct sub-reactions in the early secretory pathway. Our current focus is on the mechanisms of protein transport between the ER and Golgi complex. We study this process in yeast and animal cell models using biochemistry, molecular genetics and microscopy. Transport of newly synthesized proteins from the ER to Golgi compartments is essential for cell growth and function with approximately one-third of a cell's translated proteins entering the secretory pathway. Several genetic diseases in humans are connected to deficiencies in ER quality control and trafficking, therefore understanding these mechanisms are important for the prevention and treatment of numerous health related issues and are specifically relevant to understanding cholesterol regulation, Alzheimer's disease and cystic fibrosis.

How are ER and Golgi compartments organized to maintain their identity?

Nascent secretory proteins are folded and packaged into COPII vesicles for anterograde transport to the Golgi complex.  During ER export, COPII vesicle budding localizes to specialized ER subdomains known as ER exit sites (ERES). ERES are relatively stable and there are several dozen per cell.  We are investigating how ERES proteins are localized, how folded cargo are directed to these domains and how ER resident proteins are largely excluded from ERES. At the Golgi complex, COPII and COPI vesicles target and fuse with appropriate Golgi membranes. The golgin family of proteins play key roles in organizing Golgi compartments and targeting vesicles. We are examining how specific golgin proteins interact with one another and other membrane tethering and fusion factors to control Golgi identity.

How do cargo receptors bind and release specific cargo proteins?

COPII vesicles selectively capture cargo proteins for transport to the Golgi complex. To balance forward transport, a COPI-dependent retrograde pathway selects transport machinery and escaped ER resident proteins from Golgi compartments for return to the ER. Despite this knowledge, there is no coherent understanding of how biosynthetic cargo advances and organelle identity maintained in the face of dynamic bidirectional traffic. Through proteomic approaches, we discovered a set of transmembrane cargo receptors that cycle between the ER and Golgi to sort proteins into COPII and COPI vesicles. Now a major question in the field is how receptors accomplish net directional traffic of cargo proteins. We are testing the hypothesis that luminal environments in the ER and Golgi regulate cargo binding to receptors for net transport of proteins. 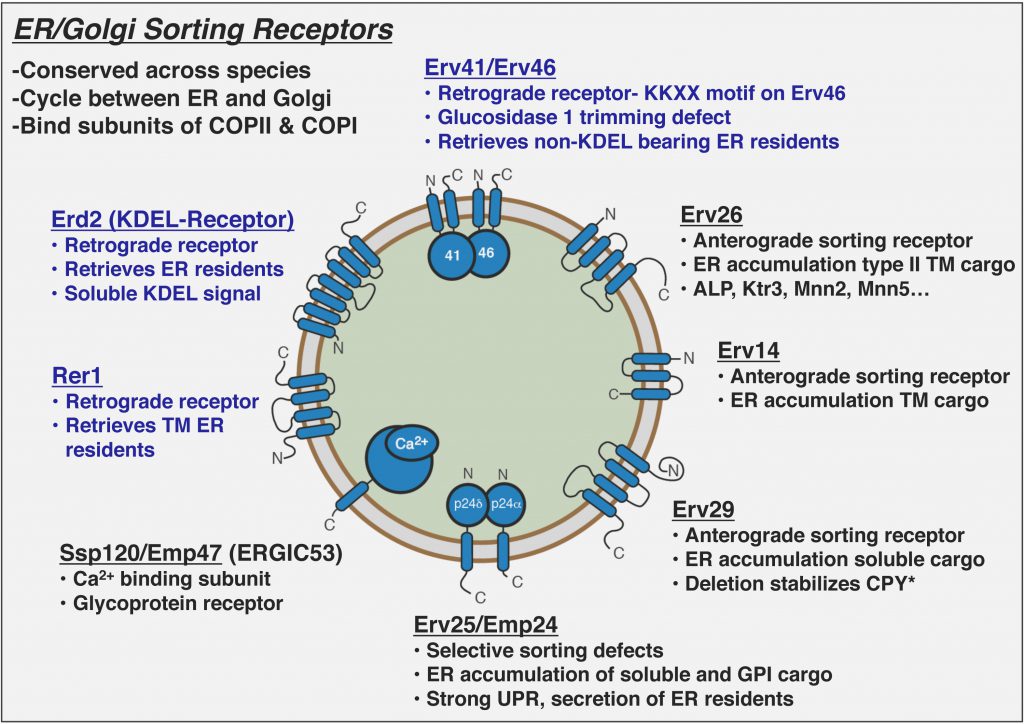 How do cargo receptors function in ER quality control?