We have several research projects ongoing in the laboratory with the common theme of using high-throughput genomics approaches to study gene/environment interactions in development and disease. 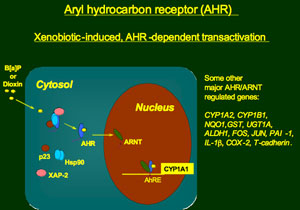 First, we are interested in the fetal basis of adult diseases or FeBAD (Fig. 1). We study the role of the aryl hydrocarbon receptor (AHR) in adult-onset cardiovascular disease (CVD). These studies are a test of the Barker hypothesis, which originated from epidemiological studies to explain the correlation between low birth rate and CVD, diabetes, obesity, and other adult onset diseases. The concept of the Barker hypothesis has been expanded to include in utero insults such as exposure to environmental agents that might influence developmental programs that adversely affect the fetus. The expanded Barker hypothesis, simply stated, is that an in utero stress; be it nutritional, chemical (drug or toxicant exposure), or physical; increases the likelihood that children borne of that mother will develop adult onset diseases and that this enhanced risk of disease is passed on to subsequent generations.

Using a mouse model system, we are testing the hypothesis that an in utero exposure of a toxicant to the fetus alters global AHR-regulated gene expression and genome-wide methylation patterns to reprogram the developing CV system resulting in heritable, trans-generational adult-onset cardiovascular disease. Thus, the primary objective of our work is to (1) correlate genome-wide methylation and global RNA expression profiles to identify those genes, signaling pathways, and developmental programs affected by a toxicant exposure during development that leads to an adult disease, and (2) determine whether the epigenetic changes in the developmental programs are inherited. 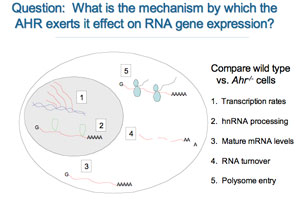 We selected the AHR signaling pathway (Fig. 2) as a likely participant in a toxicant-induced cause of a fetal-based, adult disease. The AHR is a major component in the cell's defense against hundreds, if not thousands, of pervasive environmental toxicants, and is a member of the PER-ARNT-SIM or PAS family of basic-region-helix-loop-helix or bHLH transcription factors.

Upon toxicant (ligand) binding, the AHR translocates to the nucleus where it complexes with the aryl hydrocarbon receptor nuclear translocator (ARNT). The AHR/ARNT heterodimer activates the transcription of a battery of genes encoding proteins involved in xenobiotic metabolism, which in turn, catabolize the AHR-bound toxicant to complete an elegant biological feedback loop. We use three different AHR activating toxicants, each with quite different catabolic pathways and physiological effects, i.e., dioxin, benzo[a]pyrene, and benzene. 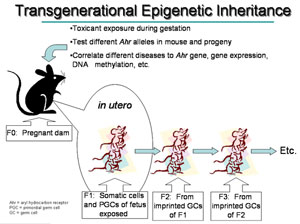 A second project in the lab is to develop new genomics technologies to examine all levels of gene expression (Fig. 3). The project involves the study of the global expression of RNA at the levels of transcription, the roles of DNA methylation in gene expression, the rates of nuclear and cytoplasmic RNA turnover, the accurate measurement of steady-state mRNA levels, and the regulation of polysome entry.

A third project in our laboratory is to determine the role of the AHR in mediating the effects of curcumin (and arsenic) on cystic fibrosis. Approximately 3,500 babies are born with CF annually, which dooms them to a drastically impaired lifestyle and reduced lifespan. Both curcumin (Fig. 4) and arsenic are ligands for the AHR. We culture human bronchial airway epithelia isolated from a ΔF508CFTR-/- patient (CFBE) and isogenic cells (CFBE+wtCFTR) complemented with the wild type cystic fibrosis transmembrane conductance regulator (CFTR). The CFBE and CFBE+wtCFTR cells are manipulated by siRNA methods such that the Ahr gene is expressed at either relatively high or low levels. A distinct advantage of using this strategy is that by virtue of the integral role the AHR plays in response to environmental agents, any corresponding differences observed in the inflammatory response and in gene expression and regulation profiles are due to the differing capacities of the AHR response. Thus, these studies are a superb means to study gene (Ahr) / environment (As or curcumin) interactions and their roles in lung inflammation.

The rationale behind this project is that in 2004, a scientific paper was published in the prestigious journal Science reporting that the common spice ingredient curcumin corrected the CF defect. The authors proposed that curcumin blocked Ca++ channels in the endoplasmic reticulum (ER) to prevent Ca++-dependent chaperones from normally retaining the faulty CFTR for proteasome destruction. Since then, several independent laboratories have supported the claim and others have refuted it igniting a controversy in the CF research field.

Remarkably, in all the studies that tested whether curcumin could correct the ΔF508 CFTR defect, including the study that initiated the controversy, none considered two critical aspects of curcumin that may have played a role in its perceived different effects on CF. First, curcumin is a potent ligand and inducer of the AHR signaling pathway. Given that the activated AHR pathway affects the expression of hundreds if not thousands of genes and that the activated AHR pathway induces the expression of a battery of genes encoding xenobiotic metabolizing enzymes that generate new metabolites, demonstrates that a fuller study of these issues are absolutely warranted and may, at least in part, contribute to the conflicting results. Second, curcumin has powerful anti-inflammatory properties. Given that the primary cause of death from CF may be due to an overly active inflammatory response to oxidative stress and that anti-inflammatory treatments for CF show promise, an investigation into the anti-inflammatory role of curcumin is also absolutely warranted and may be too, at least partly, the underlying cause for the conflicting results.