Cagney Coomer, PhD, a postdoctoral trainee in the Halpern Laboratory in Molecular and Systems Biology at Dartmouth’s Geisel School of Medicine, has been selected as a 2022 Hanna H. Gray Fellow by the Howard Hughes Medical Institute (HHMI).

Coomer is one of only 25 biomedical researchers chosen across the U.S. this year as an HHMI Hanna Gray Fellow through a highly competitive selection process, and she is the first scientist from Dartmouth to receive this honor, which focuses on recruiting and retaining individuals from gender, racial, ethnic, and other groups that are underrepresented in the life sciences, including those from disadvantaged backgrounds. The program honors the contributions of Hanna Holborn Gray, PhD, an inspiring leader and one of the founding trustees of HHMI.

The two-phase program is designed to support fellows through their postdoctoral training and their early career years as independent faculty—providing up to $1.4 million in funding over eight years. Fellows also participate in professional development, mentorship, and networking with their peers and the broader HHMI network of scientists.

As a scientific philanthropic organization, HHMI is dedicated to advancing basic biomedical research and science education for the benefit of humanity and believes that solving the most vexing problems in science and medicine requires the engagement of individuals from a diversity of backgrounds. 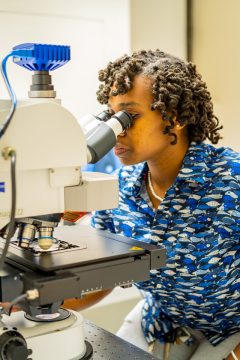 “I’m honored to be chosen as a Hanna Gray Fellow and to become part of such a distinguished community of scientists,” says Coomer. “Receiving this kind of funding and support from HHMI is validation for the work I’ve been doing and the science I’m planning for the future. It will give me the freedom to take risks, explore new areas, and bring my ideas to life.”

Using zebrafish as a research model, Coomer is developing trans-synaptic tracing techniques to map, monitor, and manipulate neural circuits. She aims to apply these powerful techniques to study how neural circuits develop and function, and how neurons communicate with each other.

“Neural circuits are the fundamental connections that form the basis of all brain functions, from cognition to behavior,” she explains. “By being able to map neural circuits, we can start to understand the underlying mechanisms of how brains function and then be able to associate those functions with human neurological diseases.”

Coomer is particularly interested in regeneration of neural circuits. “The zebrafish is capable of regenerating neurons along with other organs in the body including the heart, the liver, and the retina,” she says. “But as humans when we lose nerve cells there’s no way to properly recover the function they provide. Perhaps by studying animals like the zebrafish we can someday discover ways to restore neural functions lost because of illness, damage, or the aging process.”

The techniques that Coomer is developing will provide important tools for neuroscientists and have the potential to increase our understanding of how neural connections regenerate, says Marnie Halpern, PhD, The Andrew J. Thomson Professor and chair of the Department of Molecular and Systems Biology at Geisel.

“Cagney is an exceptional person and highly deserving of the Hanna Gray Fellowship award, not only because she excels in the lab but also because of her deep commitment to science outreach activities,” says Halpern, who serves as Coomer’s primary mentor. “Everything Cagney has achieved has been through her own grit, determination, and creativity—I think that’s why she feels so strongly about paving the path for others.”

Coomer has partnered with communities and schools across the country to introduce the wonders of science to young students, especially those from underrepresented groups, and make it fun and relatable to their daily lives. “She’s also mentored students in my own lab, like Rosario Rosales, a Dartmouth undergraduate student and E.E. Just summer fellow, empowering them to believe in their potential,” adds Halpern.

Previously, Coomer received the Society of Developmental Biology’s inaugural Trainee Science Communication Award, and also the Algernon Sydney Sullivan Award, for her work with NERD SQUAD—a non-profit organization she founded that encourages girls of color to become interested in STEM fields—and her other outreach efforts.

For Coomer, being a mentor and role model for youngsters has given her much in return. “Being able to share my love of science with them and to show them what’s possible is a great feeling,” she says. “It’s made me proud to have chosen this as a career.”

Coomer obtained her AS from Bluegrass Community and Technical College, her BS from Virginia State University, and her PhD from the University of Kentucky.