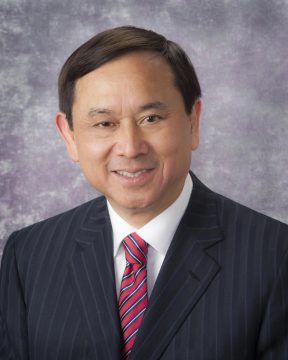 “We were all so sad to hear of Freddie’s passing. He brought a thoughtful, considered voice and excellent judgement to our most important discussions as a board of advisors. He cared deeply about the institution and the people—particularly the students—and he contributed the same insight, expertise, and energy that drove him to such an extraordinary level of success professionally to the board room. We will miss his engagement, his original insights and his sense of humor. Our deepest condolences to Freddie’s family—we will all miss him very much,” wrote Todd Sisitsky, MBA (D ’93) on behalf of the Board of Advisors.

A leader in medical education, research, and patient care—the amiable and energetic surgeon had been known to perform as many as 12 surgeries per day—Fu was renowned for his pioneering knee surgical innovations, specifically in anterior cruciate ligament (ACL) reconstruction, and his work to keep athletes and dancers healthy and performing, including five-time Tour de France winner Miguel Indurain.

An athlete himself, Fu was an all-star point guard on his Hong Kong high school championship basketball team—a sport he continued at Geisel after asking the school to install a hoop.

“Between morning and afternoon classes, Freddie organized pick-up basketball games. He was short, but remarkably quick. On the court, and throughout his life, those of us who knew him always wanted to play on his team. He made you a better player, a better surgeon, a better person,” recalled Oglesby H. Young III MED ’75, a friend and fellow Board of Advisors member.

An avid cyclist as well, it wasn’t unusual for Fu to ride 100 miles a week, he sponsored a professional team—the Freddie Fu Cycling Team of the Allegheny Cycling Association. According to Young, Fu was to deliver a talk on stem cell therapy in orthopedic medicine at their class reunion ten years ago, but “the week before our reunion, he suffered severe injuries in a bicycle accident—a badly fractured leg, and ironically, torn ACL and MCL ligaments. Remarkably, he gave his lecture to our class via video from his hospital bed!”

“He was an innovator in the field of orthopaedic sports medicine, performing ground-breaking research that helped to improve the treatment and recovery of both elite professional athletes as well as the weekend warriors among us,” said David Jevsevar, MD, chair of the Department of Orthopaedics at Geisel and Dartmouth-Hitchcock Medical Center (DHMC). “Fu is an icon in the field of orthopaedic surgery with so many firsts attributed to him it would take too many pages to recount.”

World-renowned for his approach to repairing the ACL, a career-ending injury for any athlete a generation ago, Young said, “As a physician who intensely loved sports (especially Pittsburgh teams), it is not hard to imagine the joy he experienced watching athletes return to the field or court having recovered from this injury.”

Throughout his career Fu continued making substantial contributions to the field, receiving more than 300 professional awards and honors. A prolific writer, he authored more than 675 peer-reviewed articles, co-authored more than 173 book chapters, and edited more than 30 major orthopaedic textbooks—with nearly 36,000 citations he was among the top of all orthopaedic researchers. In 2019, the University of Pittsburgh was named the number one university in the world for ACL publications over a 40-year period with Fu the most published author.

He received the Elizabeth Winston Lanier Award for his career contribution to ACL reconstruction and advances in patient care, an accolade considered to be the Nobel Prize of orthopaedic research and bestowed by the Kappa Delta Sorority along with the Orthopaedic Research and Education Foundation (previously, he was co-recipient of the prestigious Kappa Delta Award for his shoulder research). And was later inducted into the American Orthopaedic Society for Sports Medicine Hall of Fame where he had been a past president and served on its board. He also served on the board of the Orthopaedic Research and Education Foundation.

Numerous professional organizations have also honored Fu, among them, the European Society of Sports Traumatology, Knee Surgery and Arthroscopy in its Hall of Fame and as a Lifetime Honorary Member. And the Japanese Orthopaedic Society of Knee, Arthroscopy and Sports Medicine named him with the Masaki Watanabe Award for international achievement in arthroscopic surgery—an honor rarely bestowed on Westerners.

“Freddie gave much credit to the success of his career to another former medical school graduate, Albert Ferguson D ’41, MED ’42. Dr. Ferguson formed the orthopedic department at Pittsburgh in 1953 and was chair until 1986,” said Young, a clinical assistant professor of obstetrics and gynecology at Geisel. “According to Freddie, Dr. Ferguson took him under his wing and ‘let him fly.’ Freddie was beloved by his medical students, residents, fellows, and faculty. Mentoring was at the heart of what he did. He once said, ‘I am just trying to maintain the family culture Dr. Ferguson established in our department.’”

Pittsburgh native James D. Strickler D’50, MED’51, dean emeritus of Geisel School of Medicine, recognized Fu’s potential and encouraged him to go to Pittsburgh to work with Ferguson. “My contact with Freddie over the years has been infrequent, but he clearly has done an outstanding job building the orthopedic department with an intensive special focus on sports medicine. In addition to professional athletes, he also cared for high school athletes and was well-known throughout Western Pennsylvania.”

At UPMC, Fu oversaw more than 200 orthopaedic surgeons as chair of the department, and an ethnically and gender diverse residency training program, receiving the 2011 American Academy of Orthopaedic Surgeons Diversity Award for his efforts.

“When he assumed the role of chair in 1997, Dr. Fu transformed the orthopaedic residency training program into one of the country’s most diverse, as well as one of its best, and I couldn’t be prouder to say that I studied under him,” said Douglas Hampers MED ’98, who was one of Fu’s first residents.

“To have accomplished all he has in his professional career, most people would assume he sacrificed other aspects of his life—but he sacrificed nothing,” Hampers added. “He was a loving husband, a devoted father of two successful Dartmouth graduates, and one of the most caring physicians I have had the privilege of knowing. He savored those moments with family and friends. I have lost a mentor and a good friend.”

Fu was also chiefly responsible for the conception and oversight of both the design and construction of the $80 million UPMC Rooney Sports Complex, a leading sports medicine facility offering a multidisciplinary approach to sports injuries and performance—the first facility in the country to combine an academic and clinical system with professional and collegiate sports programs—that opened in 2000.

His love of Pittsburgh—the city, its team sports, and its people—ran deep. In 2013, the Pittsburgh City Council declared September 13 “Dr. Freddie Fu Day.” And for his pioneering work in orthopaedic sports medicine and his contributions to UPMC and the University of Pittsburgh, the UPMC Sports Medicine Center, following a multi-million-dollar renovation, was re-opened in 2018 as the UPMC Freddie Fu Sports Medicine Center.

“I first met Freddie as a medical student rotating through orthopaedics at UPMC. He was the most energetic and animated surgeon I had encountered, and he took time to make sure that I, along with all of the other students, were doing well,” Jevsevar recalled. “I didn’t do my residency there, but he took the time to write me a note telling me he thought it was UPMC’s loss and wished me well.”

Jevsevar and Fu saw each other occasionally at meetings and conferences over the years, and Fu always made sure to inquire whether Jevsevar was doing well. “When I led the American Academy of Orthopaedic Surgeon’s Evidence Based Quality and Value Committee, Freddie again took the time to let me know I was doing important and often controversial work, then reassured me I was the right surgeon for the job. When I relocated to the Upper Valley and joined DHMC, having no experience in academic medicine, he sensed my angst and again reinforced that I was the right choice,” Jevsevar said. “Freddie was my friend and mentor—he didn’t have to be either, but he chose to be both.”

Fu loved Dartmouth and Geisel and was committed to the success of both. He endowed the Freddie H. Fu, MD, D’74, DMS’75 Outstanding Medical Student Award in Orthopaedics given annually to a graduating medical student possessing the qualities of academic excellence, ethics, and energy toward the study and practice of orthopaedics—qualities that Fu exemplified during his medical school years at Dartmouth.

"I feel lucky to have met Freddie through his service on the Geisel Board of Advisors,” said Geisel dean Duane A. Compton, PhD. “He had an infectious enthusiasm for everything, and I was grateful to open my inbox to find his latest batch of photos from Hanover and Pittsburgh."

The keynote speaker for Geisel’s White Coat ceremony in 2013, Fu cheerfully shared with the medical students his 20 thoughts about medicine—including do what you love because it paves the way for self-fulfillment, mentors are important, and have empathy for patients. For his remarkable professional accomplishments and his unwavering support and compassion for patients, medical students, and residents, Geisel honored Fu with the Alumni Council Career Achievement Award in 2018.

“He was a celebrity, but he stayed humble and close to home. He was devoted to our medical school and I had the honor of presenting him with the Achievement Award,” Young said.

More than medicine, Fu loved his family and his friends. He credited his wife, Hilda Pang Fu, with “providing him the support and the guiding light he needed to soar as he did in his professional career,” Young noted.

“Freddie and I met the first day of classes almost 50 years ago. Like all of us, he seemed anxious, but excited to finally start medical school. Freddie never lost that spark of enthusiasm and love for learning, and later research and teaching,” Young added. “I was taken back by his frequent emails, recently those with many incredible photos, expressing his love of nature, Pittsburgh, and his family. It seemed a wonder that Freddie made time for an old classmate like me, but he was someone who made those around him feel special.

“For years, a worn basketball hoop stood outside of the doors of Chilcott Auditorium where we played. When I walked by it, I always remembered Freddie and our games, thankful that somedays I was on his team, and grateful that he has been part of my life.”

“For the past 3-4 years, Freddie and I texted each other daily,” Jevsevar said. “He started doing so because of everything we had in common—a love of all things Pittsburgh, a belief in evidence in orthopaedics, love of the Upper Valley and Dartmouth, and our career roles. He sent photos, quotes, articles, and thoughts on Pittsburgh, Dartmouth, and orthopaedics. I looked forward to those exchanges.

“When they suddenly stopped last week, I was concerned. Later in the week he texted to let me know that his health status had taken a turn for the worse. He didn’t want me or anybody else to be sad or worried. He told me that he was in a great place in life because he had so many friends like me, and that was all he could ask for.”

In lieu of flowers, his family asks that memorial contributions be made to the Fu Family Legacy Fund, which will support the people and programs of the University of Pittsburgh Department of Orthopaedic Surgery.