Dr. Matthew T. Provencher MED '98 will be the inaugural Alpha Omega Alpha Visiting Professor at the Geisel School of Medicine from May 28-30, 2018.

Please join us for his institutional address—“Humanitarian Assistance and Disaster Relief -  Leadership Lessons from the Navy to Improve Medical Care"—on Tuesday, May 29, 12:00-1:00 PM in Auditorium H at DHMC. All are welcome to attend. 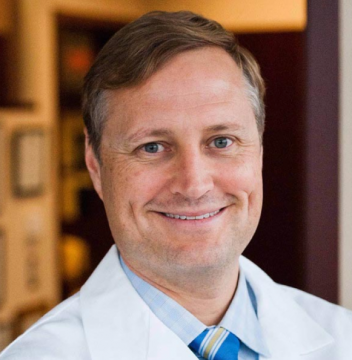 Captain Matthew T. Provencher, MD MC US, a native of Barrington, New Hampshire went to Oyster River High School in Durham, New Hampshire and then attended the United States Naval Academy, where he was appointed the Deputy Brigade Commander (Second in command), graduated with Distinction (Highest Honors) with a Major in Electrical Engineering, and was Secretary of the Navy Distinguished Graduate. He was also inducted into Phi Kappa Phi (The National Honor Society), Tau Beta Pi (The National Engineering Honor Society), and Sigma Pi Sigma (The National Physics Honor Society). He was also a 4-year varsity oarsman and First-Team All-American at Navy, and named Most Valuable Oarsman. He completed his medical education at Dartmouth Medical School (now Geisel School of Medicine) where he graduated with honors and was elected to the Alpha Omega Alpha Honor Society.

Dr. Provencher completed his orthopaedic residency at the Naval Medical Center San Diego and his orthopaedic shoulder knee and sports surgery fellowship at Rush University.  A prolific researcher, he has received numerous academic and research awards including the International Society of Arthroscopy, Knee Surgery and Orthopaedic Sports Medicine (ISAKOS) Science Award; the ISAKOS Richard Caspari Award; and the American Orthopaedic Society for Sports Medicine (AOSSM) Aircast Research Award. He was also selected for several prestigious traveling fellowships, including the American Orthopaedic Association (AOA) John Fahey North American Traveling Fellowship, the American-British-Canadian (ABC) Fellowship, and the American Orthopaedic Society for Sports Medicine (AOSSM) Traveling Fellowship. In addition, he has received several peer-reviewed research grants totaling over $1.5 million to study topics such as shoulder instability, rotator cuff injuries, and ACL tears from funding agencies including OREF, PRORP, and The Departments of the Army and Navy.

CAPT (Sel.) Provencher served as an Orthopaedic Surgeon at the Naval Medical Center San Diego from 2004 to 2013, and was Director of the Sports Medicine and Surgery Program from 2007 to 2013. As the Head Orthopaedic Team Physician for the Navy Seal Teams 1, 3, 5 and 7, he was also instrumental in setting up the Special Forces Tactical Athlete Program – a comprehensive wellness, injury prevention and rehabilitation program for Naval Special Forces. In addition to his orthopaedic duties, CAPT(Sel.) Provencher performed extensive Humanitarian and Disaster Relief (HDR) work.  In this capacity, he served as the Director for Surgical Services (DSS) for three years on the USNS Mercy (TAH-19) and was the surgical leader (DSS) during Pacific Partnership 2012 – the largest Humanitarian and Civic Action in the Asia-Pacific region focused on building stronger relationships and building disaster response capabilities with partner nations.  In this capacity, he led a 500-member medical-surgical team on a five country Disaster Relief training mission in the Asia Pacific region in 2010 and 2012.

In 2012, Dr. Provencher then took on the positions of Chief of Sports Surgery at Massachusetts General Hospital (MGH), Visiting Professor of Harvard Medical School, and Medical Director and Head Team Physician for The New England Patriots football team. He was the Medical Director of the Patriots during the 2014 Super Bowl Championship season. In addition to these positions, he also acted as an assistant team physician for the Boston Red Sox and Boston Bruins. Following his time at MGH, Dr. Provencher began his orthopaedic duties at The Steadman Clinic and Steadman Philippon Research Institute in March 2016. For his academic achievements in the realm of Sports Medicine and Surgery he was elected into the prestigious Herodicus Society in 2010, which identifies excellence in Orthopaedic Sports Surgery.  He was also nominated to The Board of Directors for the American Orthopaedic Society of Sports Medicine (AOSSM) from 2011-2013.  He serves on numerous national and international committees and was the Arthroscopy Association of North America (AANA) 2014 Program Director as well as the Co-Director of the San Diego Shoulder Institute Annual Meeting. Dr. Provencher remains active in the publishing leadership realm as the Assistant Editor in Chief of The Arthroscopy Journal. He is an active member of Arthroscopy Association of AANA, AOSSM, ISAKOS, American Shoulder and Elbow Surgeons (ASES), and the International Cartilage Repair Society (ICRS).

Dr. Provencher was recently named one of the Top 28 Shoulder Surgeons in the United States and also one of the Top 28 Knee Surgeons in the United States by Orthopaedics Today, and is recognized by Becker’s Orthopaedics as “One of 59 Great Orthopaedic Surgeons”. His research includes over 165 peer-reviewed publications and articles, 148 chapters, and has authored 5 textbooks. He continues his duties in the Navy as a Reservist. Dr. Provencher resides in Edwards, CO with his wife and four children.