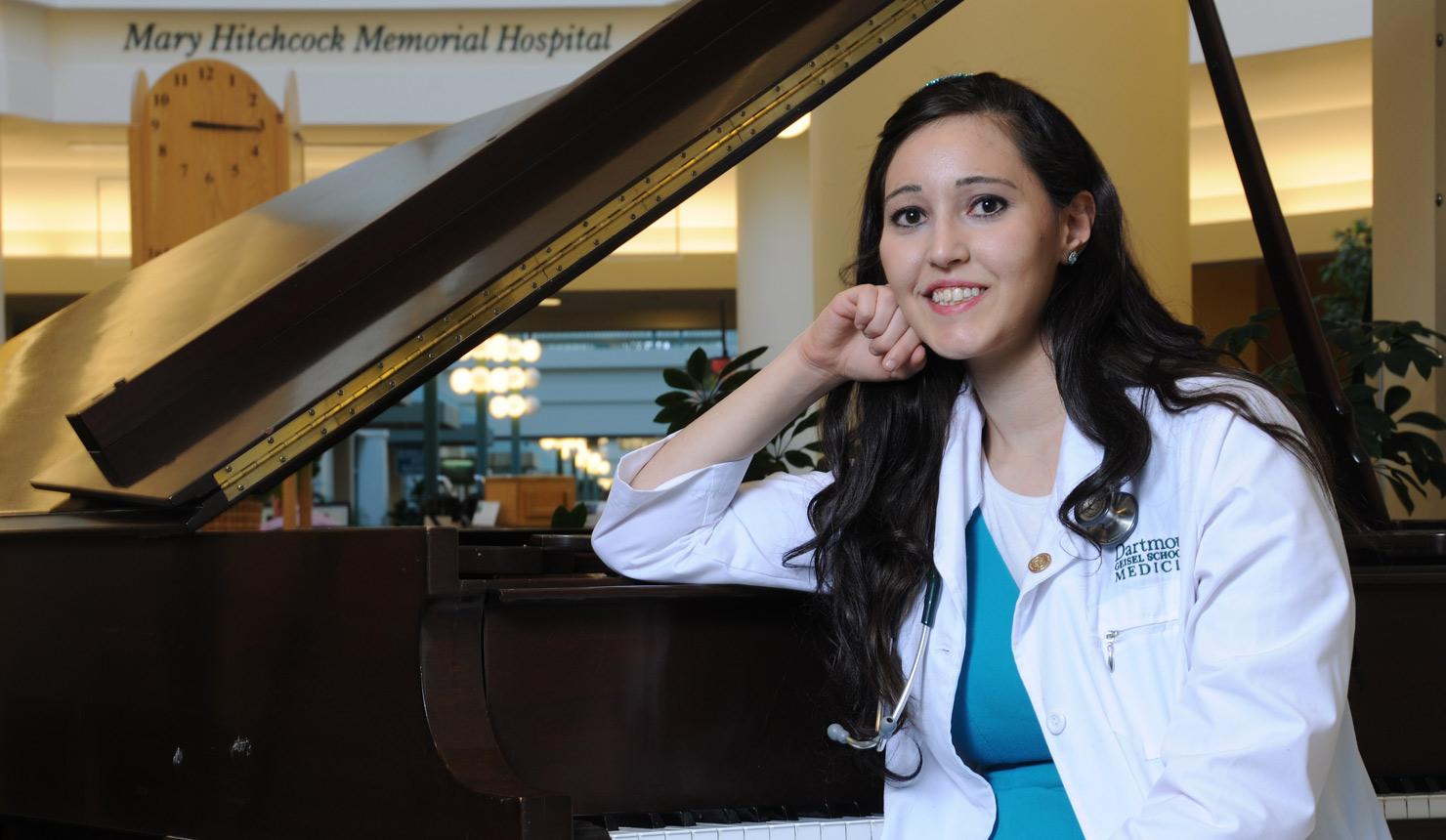 First-year Geisel School of Medicine student Nara Michaelson is a quintessential Gemini. Those born under this zodiac sign are said to possess a natural duality: they revel in a life of the mind yet have an unending urge to communicate with others and to express themselves.

As both an aspiring physician and a musician, it’s no surprise that Michaelson is comfortable with this duality—she believes rather than being at odds, music can complement, renew, and strengthen a life in medicine. “Music contributes to my emotional wellbeing. Playing piano also enhances my ability to pay attention to the smallest details,” she says. For her, this may mean being able to pick up and understand nuances in a patient’s emotional state, which, she notes, may lead to a better treatment outcome.

Music and medicine have long been connected. Both disciplines require endless hours of training and dedicated practice to be successful. Both can powerfully influence intimate human connections. And finely honed listening skills enable musicians and physicians to tap into nuances that go beyond the technical languages that define their respective fields. Examples of this symbiosis are two commonly used and widely recognized physician’s instruments: the tuning fork and the stethoscope. Nineteenth century French physician and amateur flautist Rene Laënnec designed the stethoscope to better listen to the sounds of his patients’ hearts and lungs. John Shore, an eighteenth century musician and instrument maker, invented the tuning fork, which is used by physicians today to test a patient’s sense of hearing and vibration—as well as for tuning the old Steinway,

And for Michaelson, that harmony is a longtime interest in neuroscience. As an undergraduate, she studied brain and cognitive sciences at the Massachusetts Institute of Technology (MIT) where she conducted research on the brain’s cognitive reward circuitry. (Relatedly, music is a complex activity engaging the reward system deep in our brains that is important to motivation and emotion.) While at MIT, she received funding to study the biological basis of anxiety and depression at the Max Planck Institute in Munich, Germany. After graduating with honors, she landed a job as a researcher in a lab at the Center for Neurologic Diseases at Harvard Medical School where she explored the underlying genetics of Multiple Sclerosis (MS).  Her research there focused on a T cell marker that correlated with a susceptibility to MS; her findings were published in the Journal of Immunology. When the lab relocated to Yale School of Medicine, Michaelson was instrumental in the logistics of its transfer, becoming a founding member of the lab.

Even though Michaelson was happy to continue with a career in research, medicine and thoughts of becoming a doctor were also on her mind. When the timing felt right she applied to medical school.

“Looking back, I’m happy that I had those research experiences—they really helped me. When thinking about medical school, everybody I talked to told me that rather than following a set timeline, I should remain true to myself. I’d know when I was ready. They were right,” she says of her decision to become a physician.

“I’m very happy here and I’m thankful for all of the many opportunities to get involved in this exciting place,” she says. “Saying you have a tight community doesn’t make it so, but it’s true here. At Geisel you aren’t a number, you are a person, and that attitude will influence how I care for patients,” she adds.

Growing up in a large Midwestern state lacking sufficient health care for much of its rural population, Michaelson is well aware of the financial and emotional challenges in caring for patients, particularly the uninsured—a point brought home during a class discussion about the cost of their care. Recalling how many neighbors in her hometown would travel miles to seek medical care at a free clinic that was open only a few days each month, she says people don’t always stop to think about who the uninsured are.

“Often they are viewed as being a huge financial burden on the health-care system, but if you aren’t, or haven’t been, in their situation you may not be able appreciate the person behind the patient. So many people fall through the cracks and it’s not their fault,” she says. “Not having health insurance is not a personal failing—I think one of our long-term goals should be to help empower people to overcome their financial struggles, lead healthier lives, and become a sustaining force for inspiration in their communities.”

Drawing on her passionate belief in music’s healing power, Michaelson, who began studying piano and performing at a young age, shares her love of music performing for nursing home residents and in community centers. And to balance her hectic life as a medical student, she regularly sings with a Dartmouth a cappella group—immersed in the moment, she says singing’s rhythmic patterns work their magic by melting away the day’s stress.

“Music is an important part of my life and it balances out the intense academics,” she says. “As with medicine, when you finally reach a certain level of mastery it’s amazing what you can accomplish.”