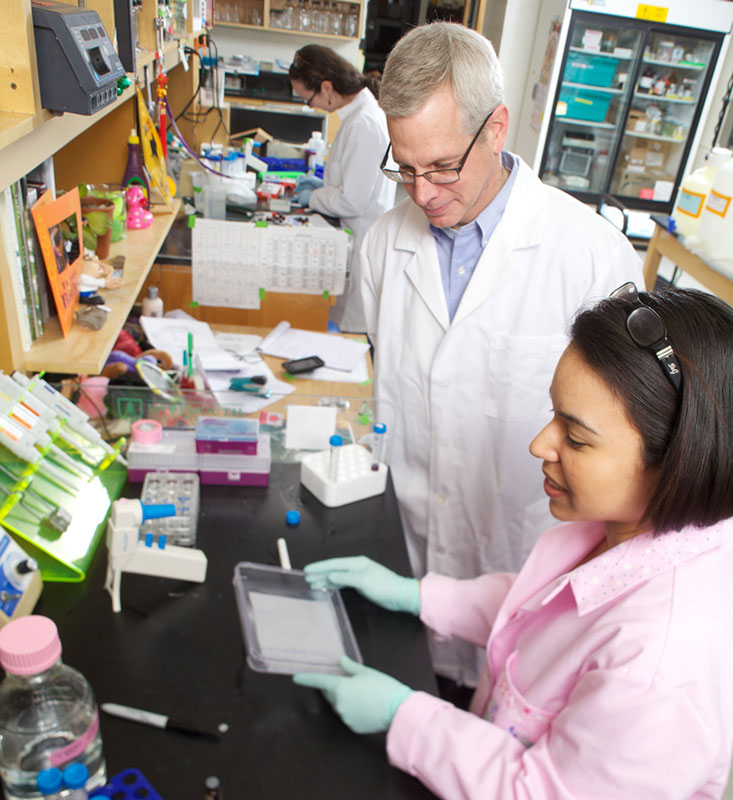 Dartmouth researchers Lilian Kabeche, PhD, and Duane Compton, PhD, found that cyclin A acts as a master controller to ensure the faithful segregation of chromosomes during cell division.

Hanover, NH—In a study to be published in the journal Nature, two Dartmouth researchers have found that the protein cyclin A plays an important but previously unknown role in the cell division process, acting as a master controller to ensure the faithful segregation of chromosomes during cell division.

Cell division is the process in which cells reproduce by splitting into two identical copies. This process happens trillions of times in an average person's lifetime. To generate two identical copies, cells must separate their chromosomes precisely, an event that relies on the bi-oriented attachment of chromosomes to spindle microtubules through specialized structures called kinetochores. In the early phases of division, there are numerous errors in how kinetochores bind to spindle microtubules. Normal cells efficiently correct these errors so that chromosomes segregate faithfully. However, cancer cells generally do not correct these errors, resulting in daughter cells with abnormal numbers of chromosomes, which may help these cancer cells develop resistance to chemotherapy treatments.

In their study, Dartmouth researchers Lilian Kabeche, PhD, and Duane Compton, PhD, show that microtubule attachments at kinetochores are very unstable in early phases of division. The unstable attachments promote the correction of errors by causing a constant detachment, realignment and reattachment of microtubules from kinetochores in the cells as they try to find the correct attachment. Their study found that the protein cyclin A governs this process by keeping the process going until the errors are eliminated.

"An analogy for this process could be dating," said Compton, Senior Associate Dean for Research and professor of biochemistry at Dartmouth's Geisel School of Medicine. "The chromosomes are testing the microtubules for compatibility—that is, looking for the right match—to make sure there are correct attachments and no errors. The old view of this process held that chromosomes and microtubules pair up individually to find the correct attachment, like conventional dating. However, our results show that the system is more like speed dating. All the chromosomes have to try many connections with microtubules in a short amount of time. Then they all make their final choices at the same time. Cyclin A acts like a timekeeper or referee to make sure no one makes bad connections prematurely."

In normal cells, persistent cyclin A expression prevents the stabilization of microtubules bound to kinetochores even in cells with aligned chromosomes. As levels of cyclin A decline, microtubule attachments become stable, allowing the chromosomes to be divided correctly as cell division proceeds. In contrast, in cyclin A-deficient cells, microtubule attachments are prematurely stabilized. Consequently, these cells may fail to correct errors, leading to higher rates of chromosome mis-segregation.

"Many cancer cells continuously mis-segregate their chromosomes," says Kabeche. "The major cause is improper kinetochore-microtubule attachments. Therefore, understanding how kinetochore-microtubule attachments are regulated throughout cell division is important, not only for furthering our understanding of cell division, but also for allowing us to correct these problems in cancer cells."

For more information about this study, please visit http://www.nature.com/nature/journal/vaop/ncurrent/full/nature12507.html.