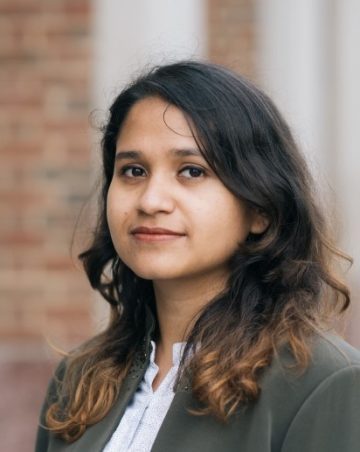 for being named an International Graduate Mentoring Fellow!

Sharanya is a graduate student in the Molecular and Cellular Biology program from Calcutta, India. Prior to Dartmouth, she served as the Operations Director of an NGO for 3 years and led several health camps for poverty-stricken people. A strong advocate of diversity and inclusion, Sharanya strives to build a community for international students so that they feel more included in a foreign land. When asked about her inspiration, she says how she arrived at Dartmouth in the peak cold of December amidst a pandemic with luggage heavier than her, and an international graduate student had helped her settle down and asked her to pay it forward. Sharanya sees herself as an extremely people-driven individual and wants to extend her support to incoming students not only with their transition to the US but also to its dynamic cultural environment. She is a trained Indian Classical vocalist and an ardent hiker, having summited mountain peaks as high as 12,000 ft.